(Clearwisdom.net) Regarding the Spanish Court's lawsuit against Jiang Zemin, Luo Gan, Bo Xilai, Jia Qinglin and Wu Guanzheng, high-ranking officials of the Chinese Communist Party who have committed crimes of torture and genocide in the persecution of Falun Gong practitioners, Ms. Heidi Hautala, Chairperson of the Subcommittee on Human Rights in the European Parliament, said: "This is an encouraging piece of news."

Ms. Hautala said: "Our task is to build such a world, so that those who have committed crimes against humanity, war criminals and the perpetrators of serious violations of human rights have nowhere to escape. Some countries will not allow them to go unpunished even if the criminals are not their own citizens. Spain and Belgium are such countries." 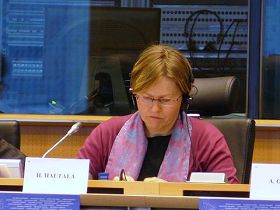 Ms. Heidi Hautala, Chairperson of the Subcommittee on Human Rights in European Parliament

She also stressed: "This must be our goal. There will be a day when we will have a comprehensive and rigorous system of international justice. Each violation of human rights must be subject to judicial trial. I can see that we are moving forward in this direction."

Ms. Hautala listed achievements that have already been made in this area, such as the establishment of the International Criminal Court ten years ago and the European Court of Human Rights. She pointed out that Asia is also now opening up to international justice. Some Asian countries have already had regional human rights cases. Although it is just the beginning, she believes that within a few years, it will be more binding to force Asian countries to respect the rights of their people.

Ms. Hautala is a former Chairperson of the Finnish Green Party. On December 1, 2009, she hosted a public hearing on human rights in China in the European Parliament. The hearing focused on the cruel persecution Falun Gong practitioners are suffering from in China, such as their being killed for their organs.

Regarding human rights in China, she thought that Chinese people should have the right to freely express their concerns.