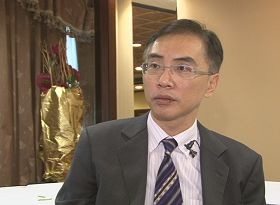 Professor Tung, who specializes in political relationships across the strait and in CCP politics, learned about the lawsuit against Jiang and other perpetrators in the Spanish National Court from the Internet. He said that NATO and the U.S. made military interventions in Kosovo in the 1990s. Compared to the military intervention in countries where torture and anti-human rights crimes happened, the Spanish lawsuit used peaceful means to bring the CCP perpetrators to court and made significant progress on the side of human civilization.

Professor Tung stated his warning for all countries not to focus only on economic interests when dealing with the CCP. They should pay attention to human rights in China. The lawsuit inspired those who aimed to pursue truth and safeguard human rights through peaceful means. He added, "We all should do that. There is no better way. Do we have to use military intervention or wait for the persecuting regime to collapse by itself? We can't wait helplessly. It is very important and appropriate to take legal action against the persecutors."

Professor Tung thought the lawsuit served as a warning to the CCP: What they did in the persecution would always be remembered. They would be brought to justice. The lawsuit was the best proof. For example, the police in Eastern Germany used to shoot at people who tried to escape to Western Germany by climbing over the Berlin Wall. There was a record of who opened fire. When the Berlin Wall was knocked down, those who opened fire were brought to justice. All lawsuits against perpetrators responsible for the persecution of Falun Gong are heavy blows to the image of Great Power the CCP painstakingly built. The CCP had to reconsider its policies and stop the persecution.

Professor Tung praised the Spanish National Court for setting up a good model. The news should be widely spread and included in teaching materials so that law enforcement in other countries would follow the Spanish court's great contribution to human civilization.

Among the CCP officials who visited Taiwan were those charged for human rights violations in other countries. Professor Tung encourages the Taiwanese government to follow Spain's example, pay attention to the people in Mainland China, take action on law-making, and support, help and rescue those under persecution through legal means.