(Clearwisdom.net) Taipei, Taiwan- The National Court of Spain indicted five high-ranking Chinese officials on November 18, 2009. The five defendants are Jiang Zemin, Luo Gan, Bo Xilai, Jia Qinglin and Wu Guanzheng and they are charged with crimes of genocide and torture. A human rights lawyer in Taiwan calls upon the international community to assist the Spanish government and extradite the five defendants to Spain for the trial. 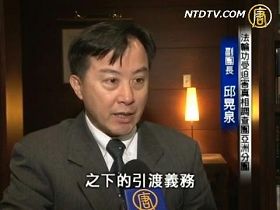 Attorney Chiu Huang-chuan, the Deputy Head of the Asian branch of the Coalition to Investigate the Persecution of Falun Gong in China

The Spanish judge Ismael Moreno's decision was made based on the legal principle of universal jurisdiction, which allows domestic courts to hear cases of genocide and crimes against humanity regardless of where they occur.

Attorney Chiu Huang-chuan, the Deputy Head of the Asian branch of the Coalition to Investigate the Persecution of Falun Gong in China, looks at it as a historical decision. It draws international attention to Beijing's human rights abuses. Besides applauding the courage of the Spanish Court, Chiu believes the international community should assist with extraditing the five defendants to Spain and subject them to the trial.

Chiu thinks that the National Court of Spain's formal criminal litigation highlighted the principle of universal jurisdiction in cases of severe human rights violations. The international community shall not be indifferent on human rights abuses, Chiu pointed out. Chiu further stated that the Spanish Court's case allows the world to rethink its association with the Chinese Communist regime. Economic benefits should not outweigh Beijing's abuses of human rights of all Chinese people. Chiu pointed out that it is impossible for a regime that suppresses its people to abide by any agreements and to associate with other countries in peaceful and civil ways.

The indictment will put the five defendants in constant fear, Chiu believes, because they could be arrested any time if they travel outside of China. The decision will also intimidate those who are still torturing Falun Gong practitioners in China, said Chiu.

Chiu mentioned that the Nazis' crime of genocide against the Jews was not exempted because they were forced by the state order to do so. The officials who participate in the persecution of Falun Gong in China should know that they are not safe overseas once they committed the crime of genocide in China.

Chiu said that the Taiwan government should have the courage to face China's human rights issues. Taiwan should refuse entry or expel the Chinese officials who are confirmed participants of the persecution of Falun Gong. Chiu also suggested the Taiwan government to assist Spain in extraditing the defendants or to try them with the principle of universal jurisdiction.

In 1999, former CCP head Jiang Zemin singlehandedly instigated the campaign to "eradicate" the spiritual practice of Falun Gong. The genocidal policies of "defame their reputations, bankrupt them financially, destroy them physically, and counting deaths due to torture as suicide," resulted in large number of Falun Gong practitioners being arrested, tortured, beaten to death, and going missing. Many had their organs harvested while they were still alive, for the lucrative organ transplant trade. The other four defendants are all Jiang's staunch followers.

One of the defendant is Luo Gan. Luo oversaw the 610 Office, a nationwide secret police task force that has led the violent campaign. Chinese lawyers have compared the 610 Office to Nazi Germany's Gestapo in its brutality and extra-legal authority.

The other three accused are Bo Xilai, current Party Secretary for Chongqing and former Minister of Commerce; Jia Qinglin, the fourth-highest member of the Party hierarchy; and Wu Guanzheng, head of an internal Party disciplinary committee. The charges against them are based on their proactive advancement of the persecution against Falun Gong when they served as top officials in Liaoning, Beijing, and Shandong, respectively.

In a Pulitzer prize-winning article, The Wall Street Journal's Ian Johnson describes how Wu imposed fines on his subordinates if they did not sufficiently crackdown on Falun Gong, leading officials to torture local residents, in some cases, to death.

“Canadian MP: Lawsuit Against Jiang in Spain Is an Act of Great Courage”