(Clearwidsdom.net) Liao Jifeng, 63, is friendly, pleasant, and clear minded. He is an ordinary person with an extraordinary experience. Ever since he can remember, there has always been something directing his choices.

When Liao was five or six years old, he was not interested in toys, snacks, and stories like other kids his age. He dreamed of having a teacher to guide him in how to cultivate. He dreamed of ways to become a deity. He seemed to be born with such thoughts that those his age did not share. The thoughts accompanied him and directed his decisions. 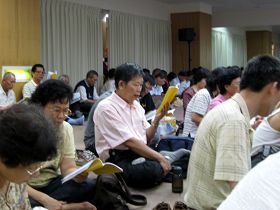 Liao owns a pawn shop. Since he was six, he had tried out different religions such as Buddhist, Taoist, Christian, and Catholic. Teachings in these religions did not touch him nor improve his health. He spent a lot of time exercising, practicing qigong, Tai-chi Fist, and Xingyi Fist. He practiced a certain qigong for almost 20 years. He joined a charity group to do good things to help society. He believed that he could have made more money if he spent time on his business, but he did not want to make money because he knew clearly money couldn't buy what he wanted and money certainly couldn't buy health.

The qigong master Liao had been following had cancer. Liao was worried. Not even the popular qigong master had good health, let alone his followers. He realized that qigong wasn't the righteous way he was looking for and he stopped practicing it.

Liao was over 50 when his health started to deteriorate. Numbers that were indicators of his health fell out of normal range. He shrank in height over an inch; his imbalanced immune system caused severe hair loss; he needed a catheter in his heart; arthritis and a spinal injury caused him constant pain; and his skin conditions would not go away.

Liao suffered not only physical torments but mental stress. To gain better health, he had learned many qigong practices and had been encouraging others to do them as well. Many people knew him as a spokesperson for health practices, but now he suffered from all kinds of illnesses. He had to go out of town to see the doctors. From 49 to 65, his life was nothing but seeking treatments. His wife was not in good health, either, and that put great pressure on him as well.

In 2003, Liao's wife started to practice Falun Gong. He did not feel comfortable letting her go alone since she had epilepsy. He drove her to the class and did the exercises with the other practitioners. While doing the second exercise, he could feel something between his arms. He knew it was real. He went back and read the book Zhuan Falun. He was almost certain the teaching was the great way he had been looking for since he was little. The practice was free and did not require giving presents to the teacher on holidays and special occasions. He believed Falun Dafa was the righteous teaching and that he needed to practice it diligently.

Fifteen days into the practice, Liao started to grow hair on his head. At the time he was wearing a wig to cover his hair loss. Liao was very excited. His new hair was black and thick and soft, like that of a child. His hair stylist and people who knew him were surprised to see how he had changed.

There were more visible changes. Liao used to drink, smoke, and chew betel nuts. He smoked two packs of cigarettes a day for many years. After he started to practice Falun Gong, he understood that all of these bad habits were not in line with the requirements for cleansing his body. Liao made up his mind immediately and quit them in a day. He also quit occasional gambling. It shocked everyone who knew him. His friends' wives all encouraged their husbands to learn from Liao, and he put in great effort to introduce Falun Dafa to them.

It did not take him long to recover from his illnesses. A year after he started practicing Falun Gong, Liao went in for a check up. All his numbers were normal. He had become very flexible, his chronic skin conditions were gone, and his skin was smoother than before. His inherited incurable blood disease thalassemia was gone, and now he can even donate blood! According to Liao, he felt like 16 when he was 61, and he felt like 11 when he was 62. He is 63 this year and as as healthy, or even healthier, than he was when he was five.

Liao feels comfortable and relaxed. He needs no medication. His life can be described as "carefree." He sleeps well, eats well, and needs no doctors, thanks to Falun Dafa.

Liao knew that he would not have been as steadfast in the practice had he not suffered what he did before. Falun Dafa helped him escape from death and from all the pain and suffering. He hopes more people can benefit like he does. He now tells people about the beauty of Falun Dafa using his own experiences.