Ms. Yu Jingzhen from Shenyang Has Been Detained for Three Months--Faces Charges from the Ministry of Justice (Photo)


(Clearwisdom.net) (By a correspondent from Liaoning) Ms. Yu Jingzhen, from Chenxiangtun County in Sujiatun District, Shenyang, Liaoning, has been practicing Falun Gong for thirteen years. She is sixty-five years old and still in good health. Before her detention, she was doing housework, caring for the family land and taking care of her husband, who has diabetes. 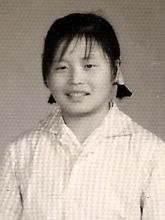 Yu Jingzhen when she was young

Ms. Yu's family has been forbidden from seeing her, and they haven't received any information about her. They were not informed until recently that Ms. Yu's case had been sent to the Procuratorate of Sujiatun. Ms. Yu is now being framed by the CCP Ministry of Public Security, the Procuratorate and the court.

Before she practiced Falun Gong, Ms. Yu Jingzhen was very competitive and unhealthy. Her legs hurt as if cut by a knife if she stood for very long. Trying to treat the condition cost her a lot of money but she did not recover. These symptoms disappeared soon after she started practicing Falun Gong in 1996. She guides herself with the principles of Truthfulness-Compassion-Forbearance, and always thinks of others first. She has contributed to her community by doing things such as cleaning the hallways in public buildings and gets along with her neighbors very well.

Ms. Yu Jingzhen explained the facts about Falun Gong to people. She was apprehended and persecuted by local police in 2002. She was sent to a forced labor camp and when she was released from the camp, her hair had turned white and only one tooth was left in her mouth.

Ms. Yu Jingzhen is now being held in the Shenyang Detention Center. Her husband, who is seventy years old, is alone at home without anyone to care for him.