(Clearwisdom.net)On October 11, Falun Gong practitioners from Sydney were invited to the annual Lane Cove Village Fair. They explained the facts about Falun Gong and exposed the brutal persecution to the public. 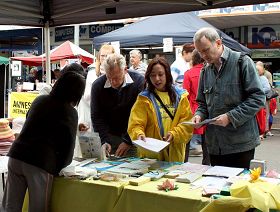 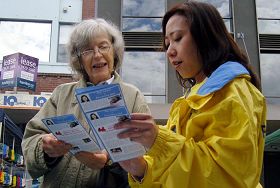 Many people visited the Falun Gong booth. Practitioners demonstrated the exercises and handed out many informational materials. A lot of people were shocked when they learned about the persecution. Many of them signed their names to condemn the persecution. 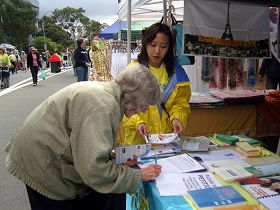 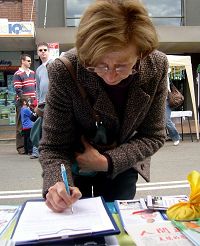 Kit Peters, a local businessman, said, "I would like to help to stop the persecution. It should not go on anymore." He signed his name on the petition and asked practitioners for some flyers. He said he would tell his friends and family about what he had learned. He also asked practitioners to keep him posted on any news about Falun Gong.

Aimee Nathan, a high school student, felt peaceful energy around the practitioners' booth. She learned the exercises and bought a copy of ((Zhuan Falun}}.

Many people said that they had already heard about Falun Gong and the persecution and expressed their support.