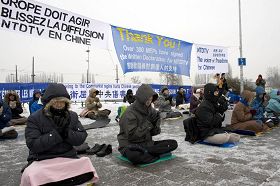 Supporters of NTDTV appeal outside European Parliament despite icy weather

On January 14, supporters of New Tang Dynasty TV (NTDTV), including Falun Gong practitioners, braved the cold and snow in front of the European Parliament to display banners reading, "Thank You, MEPs Who Supported NTDTV." Their perseverance in the snow throughout the day moved many MEPs. In the ice and snow, some supporters who called for the restoration of NTDTV's signal to China were interviewed.

The event's organizer, Mr. Hu said, "For six months, since Eutelsat cut off NTDTV's signal, we've constantly held activities in front of Eutelsat and the European Parliament, which changed the situation a great deal. Some MEPs who did not initially understand the issue changed their attitudes. We asked MEPs to support the restoration of the NTDTV broadcast into China to make it possible for mainland Chinese to see NTDTV's programs as soon as possible. Those behind me who are sitting in the snow share the same goal. We hope to sound the voice of justice. Forget about rain, we would be here even if iron came down from the sky."

An NTDTV reporter relayed something said to her from Ms. Rodust, a German MEP. The MEP said, "I saw that these people stood there for a few hours since morning to appeal for this. I don't even need to know what it is about, I will definitely support it. If they could stand for several hours in the snow under such conditions, they must clearly know from the bottom of their hearts that this is the right thing to do. Therefore they can also convince me to firmly support it from the bottom of my heart." When the NTDTV reporter briefly introduced the background, the MEP said, "Even though I met you for the first time, I have a good feeling about this. I feel I should support it. China indeed needs free media and a voice of freedom and democracy. These are things the Chinese people badly need."

A German MEP, Mr. Posselt, had already signed the written declaration. He said, "I regard China as an important partner of the European Union. As such, China must follow a common principle - respect for human rights. Human rights are for all people, regardless of whether they are Eastern, Western, European or Asian. There is only one common human right and freedom. Only when China follows this principle, will it become a partner worthy of equal dialogue internationally."

A Falun Gong practitioner who protested in the snow, Mr. Bo, said, "A few of us drive for two hours from Germany each day and go back in the evening as we have a lot of other projects to deal with at home. Today's snow is the most that I've ever seen in the twenty-odd years that I've been in Germany. NTDTV reports news that can't be seen in mainland China, which exposes what the Chinese Communist Party has covered up and lets the mainland public know what is truly happening around them. When we call China to tell people about the CCP's human rights abuses, we can only reach a few dozen or a few hundred of people, which pales in comparison to the large audience of NTDTV. In order for the Chinese viewers to see NTDTV's programs again and for the voice of freedom to be broadcast into China, I will persist here no matter how cold it is."

“Montreal, Canada: DPA Show a Sensational Success in the City of the Arts (Photos)”