(Clearwisdom.net) On January 10, 2009, as the curtains slowly came down on the Chinese New Year Spectacular, a grand feast for the senses and the soul at the renowned Boston Opera House, thunderous applause broke out and resonated throughout the magnificent theater. Perhaps just as poignant as the passionate reaction is the rave review from audience members, many of them accomplished artists and musicians. 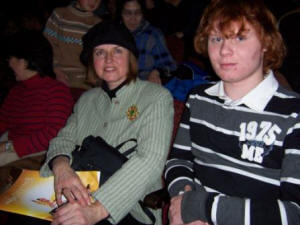 Ms. Nelson is the director of the Boston Lyric Opera, New England's most popular opera company. Its main stage productions at the Citi Performing Arts Center Shubert Theatre, along with live broadcasts on WGBH radio and traveling production of a fully-staged, one-hour English version of a popular opera for school children and families, reach some 200,000 people each year. Ms. Nelson brought her son to share the joy of the Chinese New Year Spectacular. As a seasoned expert in stage management, Ms. Nelson was very impressed by the technology behind the digital backdrop, "I'm interested in how that [backdrop] works (laugh)! I'd like to find out more about it." She also praised the extraordinary loveliness of the program, "The beauty in the dancing and the costumes is so concentrated!"

Her son Dider said he had never before seen anything like the Divine Performing Arts, and he really liked it. 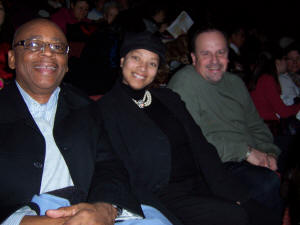 Musician and singer Mr. Wright (left) and his friends

Musician and singer Mr. Wright articulated similar feelings of amazement and wonder, as reflected in his remarks, "It's beautiful, the movements are extraordinary, and I love the costuming." Being a classically-trained baritone bass, Mr. Wright was "listening especially to the tenor Tian Ge." He commented, "The quality of voice is unique, the range was great, and there was a lot of substance to his voice." Even more stunning to Mr. Wright was the live orchestra, which combined original Eastern and Western scores, "I was wondering what they've done with the orchestra--it's tremendous! It's marvelous to hear the orchestra and then to hear the Chinese instruments. It's wonderful!"

Mr. Wright's friend John, who also has a background in music, enthusiastically called the Divine Performing Arts, "Very divine" with "a lot of spirit and a lot of history." 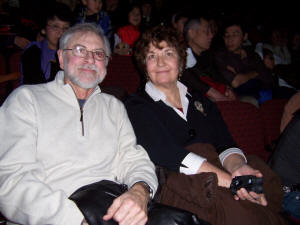 The Spectacular has seen no shortage of top talents among audience-turned-fans wherever it presented its magic touch. Debbie Alexander, a landscape designer and Boston native, described the show as "fabulous" and "totally beautiful." She was intrigued by the choreography and extolled the intricate hand movements, "The way they use their hands is outstanding!" She also appreciated the bilingual hosts, "I'm glad they are doing it in both Chinese and English, because I think it's nice to hear the sounds of the language and it helps you get into the background, the landscape, and then the costume." She also noted that the Spectacular presented Chinese history with such vivid coherence and incredible clarity, "It puts things in context, because it's nice to have it all come together."

Mr. Mercer is a veteran photographer with several decades of experience. He owns a workshop in Boston and provides his service for image design, ad design and media corporations. When talking about the DPA, he could hardly suppress feelings of admiration and excitement, "I love the show because it's really inspirational, the movements, the poses, the colors, the jewelry... Oh, it's just really spectacular! I know I'm going to incorporate some of that in my portraits." The world-class dancers almost left him speechless, "The precision of everything in sync with every dancer, [how it's] perfectly synchronized with the next one, it's just...you don't see that very often!"