On September 15, 2008, a hearing was held in the Supreme Court of New South Wales regarding the Australia Falun Gong practitioners' lawsuit against the chief culprits in the persecution of Falun Gong, Jiang Zemin, Luo Gan and the 610 Office. 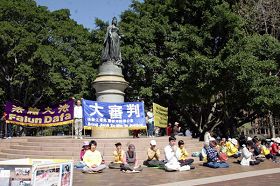 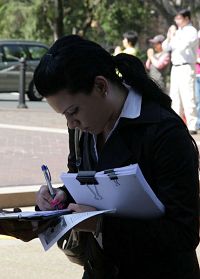 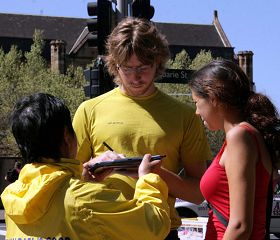 People sign the petition to support the lawsuit against Jiang Zemin

Regarding this case, the Chinese Communist regime has taken various methods in an attempt to interfere with the impartiality of the Australian judiciary, and raised the question of "immunity." The plaintiffs' lawyer presented to the court that defendants Jiang Zemin and others cannot enjoy immunity because the crimes they committed are torture and genocide. The judge listened carefully to the plaintiff lawyer's presentation. After the session was over, the judge said he would make a decision on this case soon.

The president of the NSW Falun Dafa Association also stated that the Chinese Communist Party (CCP) has tried hard to have the case dropped, and has pressured the Australian judicial system by raising the question of immunity. She stated her belief that human rights scoundrels should not enjoy diplomatic immunity, and that bringing the chief culprits in the persecution of Falun Gong to justice would have profound significance.

Plaintiff Zhang Cuiying is an Australian citizen. When the CCP launched the persecution campaign against Falun Gong in July 20, 1999, Ms. Zhang wanted to ask for justice for Falun Gong. She gave up her comfortable life in Australia and traveled to China to appeal for Falun Gong. The CCP authorities illegally detained her for over eight months. During that time, she was beaten and tortured almost to the point of losing her life. Later, thanks to the Australian Government's rescue efforts, she returned to Australia, and filed a lawsuit four years ago with the Supreme Court of New South Wales against former head of the CCP Jiang Zemin and the 610 Office for torture and genocide. Falun Gong practitioner Ms. Zhang Cuiying said that during the past four years, the CCP has tried all means possible to have the case dropped, but all that the CCP has done is in vain. Every time the CCP interferes, its crimes are further exposed. Even though the path has been difficult, she has not wavered in her steadfast belief that good will definitely conquer evil. The lawsuit was filed to stop the CCP's atrocities, and defend and renew dignity, morality and justice for humanity.

A spokesperson from the legal team that filed the lawsuit against Jiang said that many local people have signed the petition to support the lawsuit against Jiang. In a short period of two weeks, over 6,000 signatures were collected. Signatories included judges from the Supreme court, lawyers and staff working in nearby government buildings, even a department manager from a nearby company. He not only signed the petition, but also asked for additional signature collection forms. He said that he has over 40 staff members in his company, and he wanted to ask them to sign in support of Falun Gong.

Another signer said that he is a human rights lawyer and would like to provide help for the case. Another said he would like to help Falun Gong practitioners to find more lawyers to help with this case. Many passersby told practitioners that they had written to the Foreign Affairs Department and Department of Law, and had received replies. Many people said that human rights criminal Jiang should not be exempted liability, and should be punished according to the law.

Outside the court, on Elizabeth Queens Square, Falun Gong practitioners held huge and eye-catching banners reading, "Judgment," "Falun Dafa is Good," "Bringing Jiang Zemin, Luo Gan and 610 Office to Justice," and "Safeguard the Independence of the Australian Judiciary-Reject Interference from the CCP."

Practitioners quietly and peacefully did the exercises, and the sitting meditation, creating a peaceful and serene scene.

Currently, Jiang Zemin has been charged in 15 countries around the world for crimes against humanity and torture.