The first Plenary Session of the European Parliament was convened in Brussels from the 1st to the 4th of September, after its summer recess. Several Members of the European Parliament expressed their concern over French satellite company Eutelsat turning off Chinese language broadcasts into China. The broadcasts in question come from NTDTV, a New York based Chinese language television station; perhaps the only one in the world not controlled by the CCP. Eutelsat switched off the broadcast signals under pressure from Chinese communist officials. Eutelsat is eager to do more business with China, but was threatened to lose the chance to do so if they didn't shut down NTDTV. The CCP doesn't want NTDTV broadcasts, because NTDTV doesn't play CCP propaganda or filter out news that the CCP doesn't want the Chinese people to hear. 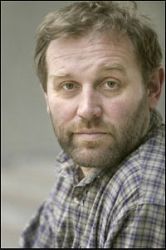 Mr. Bart Staes, MP of the European Parliament from the Green Party of Belgium.

Mr. Bart Staes, a strong supporter of NTDTV since early 2005, has been closely following the Eutelsat shenanigans. He has written special articles of appeal on his website with a letter to the President of Eutelsat demanding restoration of NTDTV television broadcast signals into Asia.

Reporter: What do you think about the importance of free flow of information in China?

Reporter: What do you think of the current situation in China?

Mr. Bart Staes: I have been very concerned about the termination of NTDTV television broadcast signals over recent months. I think that it is obvious that the reason for shutting down NTDTV television broadcast signals into China by Eutelsat is political rather than technical. For instance, we can see from the investigation by Reporters without Borders that there is plenty of spare capacity on Eutelsat's Satellite W5, particularly since the US Broadcast Board of Governors (BBG) has withdrawn from it, for instance. Voice of America left Satellite W5 as of August 1, leaving excess capacity available. There is no question that there is the capacity on Satellite W5 to handle NTDTV broadcasts. I think that the management of Eutelsat might fear the Chinese Communist regime and has been forced by its pressure.

Reporter: Being a European statesman, what is your viewpoint on the Chinese Communist regime's pressure upon a European company to exercise its news blockade?

Mr. Bart Staes: This is a very bad signal in terms of democracy. The Chinese Communist regime knows well about this. In the EU, many government officials and the EU organisations all have a very big demand and that is, through the Olympic Games, much freer and more independent reports about what is happening in both China and the world would be realised. However, it is sad to say and I must admit that even the Olympic Games have failed to make the Chinese Communist regime to be democratic and modernised in this respect. When NTDTV television broadcast signals into China were shut down by Eutelsat, I took action immediately through the European media against it.

Eutelsat should ensure its service to its customers.

Reporter: What do you think of Eutelsat's continued insistence on "technical reasons" for its refusal to restore NTDTV signals?

Mr. Bart Staes: The so-called technical reasons are sheer nonsense. A lot of evidence has shown that there are sufficient spare locations in Satellite W5 that can be used for broadcasts. Although it says it was technical reasons, the fact is, they're giving in to pressure from the Chinese Communist regime.

Reporter: What do you expect of Eutelsat in respect of news freedom?

Mr. Bart Staes: Eutelsat should not act upon political reasons but act as a real satellite service provider. A real satellite service provider will offer various possibilities to its customers to ensure what they want to do. NTDTV is a customer of Eutelsat. Eutelsat should do in this way and not yield to the pressure of the Chinese Communist regime as it is now technically possible to broadcast NTDTV television signals into Asia

The EU should take action.

Reporter: You supported NTDTV three years ago when the Eutelsat first tried to drop NTDTV. Now it is happening again. What is your viewpoint on this?

Mme. Viviane Reding, an EU Commissioner in charge of communications, recently wrote a letter to Eutelsat requesting explanations on the shutdown of NTDTV television broadcasts into Asia. Mr. Bart Staes has expressed his full support for her action and she will also receive support from the European Parliament. The European Parliament delegation to China should take responsibility to put pressure on Beijing authorities to ensure that free and independent media are accessible to the people of China.

“Germany: Clarifying the Truth during "China Time" in Hamburg (Photos)”

“Reflecting on the Words of a Detained Fellow Practitioner”