(Clearwisdom.net) On August 23 and 24, Falun Gong practitioners from the Bay Area of California attended an annual festival in Oakland. At this event, many tourists learned the truth about the persecution. 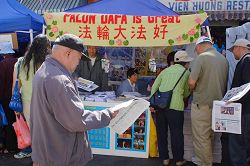 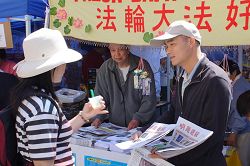 Clarifying the truth about Falun Gong

Mr. Zhang, a computer engineer and a Falun Gong practitioner, brought his children to the festival and passed out many truth-clarifying materials. He said that although he is very busy, he still wanted to come here to expose the persecution. When he thought about the people who are being tortured in China, he could not stay home. "I want people to know the evil nature of the Communist Party and the truth about Falun Gong," he said.

A woman from Hayward, who came to the practitioners' booth at the same festival several years ago, came again this year. She asked if the situation was getting better. When she learned that more than 8000 practitioners were arrested before and during the Olympics, she was shocked. "I knew about the persecution, but I didn't know it was so severe," she said.

Ms. Liu, a tourist from China, passed by the practitioners' booth. When she tried to accept practitioners' informational materials, somebody threatened her, saying that if she accepted them, she would be arrested when she returned to China. Ms. Liu became angry. She said that the Communist Party is evil, and she quit the Communist Youth Association.

An elderly Chinese couple told practitioners that they read the Epoch Times every day, and recommended it to their friends because it is fair and truthful.

Some people had never heard about Falun Gong. Karen of Berkley learned about Falun Gong and expressed interest in learning. She wished practitioners the best. Several local people were horrified by the brutal persecution, and said that the American government should exert more pressure on the Chinese government to improve the human rights situation in China.

“Japan: Practitioners Parade in the Rain, Spectators Praise Their Steadfast Efforts to Stop the Persecution (Photos)”