(Clearwisdom.net) On August 8, 2008 at 1:00 p.m., a rally was held by the Swedish branch of Reporters Without Borders, and a Swedish organization focused on supporting human rights in China (SRICH), along with other human rights organizations and members of Parliament. They were there to protest the Chinese Communist Party's (CCP) arrest of reporters, blockading of press freedom and violating their promise of freedom of speech made to the International Olympic Committee and international society. They also called on the communist regime to release jailed reporters, human rights advocates and Falun Gong practitioners. Falun Gong practitioners in Stockholm and other nearby cities also joined the protest. 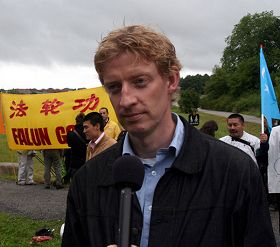 Mr. Jespter Bengtsson, chairman of the Swedish Reporters without Borders, was interviewed by the media. Birgitta Ohlsson, member of Parliament, and a spokesperson from the Liberal People's Party, and representatives for Tibet, Xinjiang, Uighurs East Turkestan, Mongolia, and Falun Gong gave speeches condemning the CCP's escalation of the persecution of press freedom and human rights while hosting the Olympics.

Mr. Vasilious, the speaker representing Falun Gong, strongly condemned the CCP's nine-year persecution of Falun Gong. He also exposed the facts about the CCP's stringent blockade of information, with the intention of deceiving its people. In the meantime, he called on people to help stop the CCP's atrocities. Falun Gong practitioners held banners reading, "Stop Interrupting NTDTV" calling for the immediate recovery of NTDTV's signal to China and all of Asia by Eutelsat, so that the Chinese people can watch uncensored news.

Mr. Jespter Bengtsson, the chairman of Swedish Reporters without Borders, said in an interview, "We are here to call on the 27 countries in Europe to boycott the Beijing Olympics' opening ceremony. This is the objective of this activity. Our broader goal is to condemn China's lack of press freedom." He also condemned Eutelsat's disconnection of NTDTV's broadcast to Asia due to threats by the Chinese regime. He said, "I think this is a scandal. It is the biggest scandal in Europe during the Olympics. It is worse than the fact that some leaders of the European countries are attending the opening ceremony of the Olympics."

Elizabeth, a representative from Reporters without Borders, said, "We hope that China can improve its freedom of the press. We hope reporters in China can be as free as those in Sweden. There should not be an information blockade or intimidations and jail terms resulting from [reporters doing] their jobs. The opening ceremony of the Olympics is held today and we hope our fellow reporters in China can share our consensus. An open and free discussion is beneficial for improving interpersonal relationships and working environment. People should be allowed to express their views freely. This is the basis of democracy. Efforts toward this goal are worthwhile."

In his remarks, Birgitta Ohlsson said, "The Beijing Olympics is employed by the communist regime as a crime cover-up and a tool to instigate its nationalism. Besides sports, we should also talk about the serious human rights infringement issues. When we talk about freedom of speech and freedom of press, we should know clearly that the individual freedom of the Chinese people has not improved at all. We should keep fighting for Chinese human rights."

The protest was held simultaneously with the Beijing Olympics' opening ceremony. Non-governmental organizations such as the Swedish Amnesty International also participated in the rally. Over ten Swedish mainstream media outlets came to report on the event.