Some Thoughts about Banners Used at Overseas Rallies and Parades (Photos)

Over the years I have participated in many large-scale rallies and parades organized by overseas practitioners. I have seen many different large or small banners and display boards that carried various messages. I feel that the effectiveness of these banners or display boards were not very good because an overall theme and consistency and clarity were lacking. The main problem was that the banner or display board designers failed to pay attention to the banners or boards' unique features, making the main subject chaotic. There were too many words, and the logic was too complicated to comprehend.

Specifically, although we used many banners during each activity, the overall impression was the lack of clear and concise themes. As a result, this made it difficult for busy people on the streets to catch the key messages we wanted to convey. On most banners and display boards the sentences were too long, had too subtle meaning and even had complex logic, or used words only Dafa practitioners are familiar with, but non-practitioners are not. In some instances the language chosen did not take into consideration the circumstances and environment of the viewers. One example: too many Chinese language banners were used in areas that mainly consisted of non-Chinese people, and the practitioners shouted out phrases in Chinese in those areas.

On July 18, 2008, the Minghui website carried an article, "U.S. Congressman: History Will Remember the Righteous Actions of Falun Gong Practitioners," which reported the activities the practitioners had organized on July 17, 2008 in front of Capitol Hill, the seat of the U.S. government. In this location, those watching the activity would be mainly Westerners. Those who were invited to the gathering were mainly the U.S. government officials as well as individuals from various Western human rights organizations. Our banners should thus have mainly targeted persons from the U.S. government, Western mainstream society, and the Western media. The wording on those banners should have been in English, emphasizing, "ending the persecution," but the wording chosen was less than ideal. The following photos published in the article attest to that. 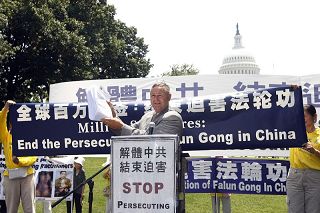 A similar problem showed up on the banners behind the congressman. The "Million Signature Global Campaign" is related to the Human Rights Torch Relay; it is done in the form of ordinary people's activities and can aid the practitioners' effort in their truth-clarification, but it is not a Dafa practitioners' activity, and it should not be emphasized too much. The banners behind the congressman should have been mainly in English, and the wording should have been even more concise. It is unnecessary to have each banner cover every aspect of the theme. It's better if each banner clearly covers one topic. The purpose was to emphasize the ruthlessness and widespread nature of the persecution (e.g., several thousand practitioners were tortured to death; several hundred thousand are detained; several ten thousand were killed for organ harvesting; the most severe human right disaster, crueler than the Nazis crimes, etc.) All those could be showcased as explanations and supplementary information to the main idea, "End the Persecution." 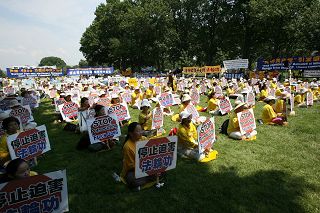 This photo came from the same event. So many banners were used, but the wording, mainly in Chinese, emphasized quitting the evil Party. Furthermore, these banners faced the inside of the activity place, which was enclosed; outsiders had no way to enter to see the message. People were left with the impression that these banners were for the involved practitioners to read.

I do not know how Western tourists felt about this. I hope that the practitioners involved in such activities can get more feedback from ordinary people who are watching the gatherings; ask them if they can understand the meaning of these banners and what messages they are getting, so that we can raise the quality of our banners and properly convey our message.

If we simply close the door and do whatever we want to do and do not care about the feelings of sentient beings and the effectiveness of offering salvation to people, or, even worse, if we even simply prepare banners for the sake of preparing banners, or hold activities for the sake of holding activities, the efficacy of our activities will be greatly reduced and we will have wasted our truth-clarification opportunities.

The second-day parade was held near the White House, again in areas where mainly Western people congregate and close to the location of U.S. government branches. But the practitioners shouted Chinese phrases about quitting the CCP, which gave people a feeling of disharmony, and being in discord with the anti-persecution message. Although what was shouted was in Chinese, I could not even hear clearly what was being shouted when I was in the parade. I do not know how the passersby felt about this. 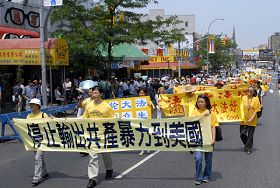 This photo was taken on June 14, 2008 of approximately 2,000 practitioners participating in the grand anti-persecution parade in Flushing, New York. The wording on many banners was too complicated, and the sentences were too long. For example, "Stop exporting the Chinese Communist Party's violence in the U.S." seemed too long. Considering that most people living in Flushing's Chinatown are minimally educated, and that many illegal immigrants living there have less than minimal education, I felt that our banners were too bookish, and not concise and straightforward. It would have been more effective had the banner simply said, "The CCP violates the law by beating people." Another banner following said, "Falun Dafa Saves the Sentient Beings." Was this too high level for ordinary people to understand? There is another banner behind it that read, "Heaven Eliminates the Ancient Snake." I do not know how many people understand what "ancient snake" means.

I will roughly analyze three photos from the Epoch Times as follows.

In the first photo - "The Qinglong County Miracle during Tangshan Earthquake: Qinglong County took preventative measures, and as a result, over seven thousand houses collapsed, but no one died during the earthquake, which the United Nations experts called The Qinglong Miracle." This was the first time for me to see such a complicated, long-versed banner. I do not know what busy passers-by could understand reading the banner, and what kind of relationship exists between "Qinglong County" and Flushing or Falun Gong? They might have had to rack their brains before they could understand the complicated relationship contained in the writing, but most people would not spend the time or energy doing so. 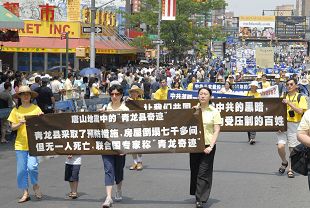 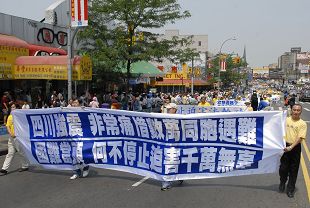 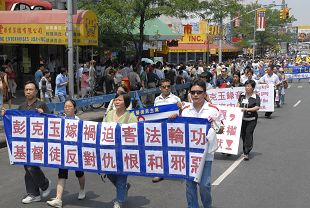 By the same token, we should also pay attention to the effectiveness of our newspapers and that of the sound system used at these gatherings. We should fully consider the effect of clarifying the truth to the surrounding people.