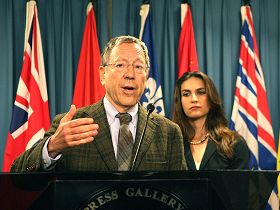 Irwin Cotler, Canadian Member of Parliament and former Minister of Justice, at the press conference 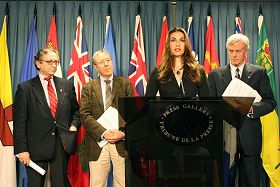 Irwin Cotler called upon all international leaders who attend the Olympics to make their voice heard for freedom and human rights.

Cotler said that in 2001 he was against awarding the Olympic Games to the Chinese government, and looking back now, he was right. He said that if China hadn't been granted the Olympics in 2001, there would not be so many people being arrested because of the Olympics now.

Nazanin Afshin-Jam, the 2003 Miss Canada, said that many people now regret the 1936 Berlin Olympics and stated that we should not have made the same mistake again. She said we should not ignore the human rights problems in China.

After the press conference, four speakers attended the rally held in front of the Chinese Embassy.

On August 7, the day before the Olympics, there were eight protests in front of the Chinese Embassies in Paris, Berlin, Washington D.C., Stockholm, Roma, Ottawa, London, and Madrid.