Wu Yingqi is a 14-year-old orphan from Shuangyashan City, Heilongjiang Province. When Wu Yingqi was very young, his mother died in a traffic accident and his father, Mr. Wu Yueqing, was arrested by the Chinese Communist Party (CCP) police and "illegally sentenced" to prison for practicing Falun Gong.

Mr. Wu was subjected to inhuman torture at the hands of guards in the Mudanjiang City Prison, and came very close to losing his life. Wanting to avoid responsibility for his untimely death, the prison authorities sent him home, where he died shortly thereafter. 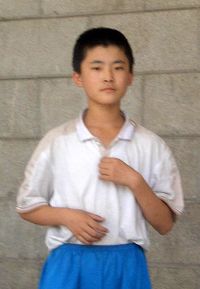 The Shuangyashan City Police Department imprisoned Wu Yingqi's only guardian, Aunt Ms. Wu Yuexia, who also practices Falun Gong, in the Jiamusi City Forced Labor Camp, where she remains to this day. The local Civil Administration Bureau took young Wu Yingqi to the Jiamusi City Orphanage, as there was no one home to look after him. 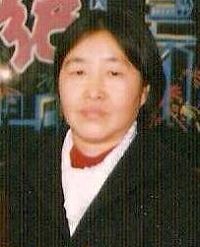 Summary of events that lead to Wu Yingqi's father's death:

In June and July 2000, Mr. Wu Yueqing went to Beijing to appeal for Falun Gong. While there, he was arrested and forcibly taken to the Tiebei Community Detention Center in Kuancheng District, Changchun City.

To protest his imprisonment, he went on a hunger strike. The guards and the prison doctor barbarically force-fed him and even forced a mineral water bottle down his throat, which damaged his throat area.

In addition, the tube used for force-feeding was inserted into Mr. Wu's trachea, instead of his stomach, thereby damaging his lungs. As a result, Mr. Wu was taken to the hospital. While in the hospital, a police officer incited criminals to fiercely beat Mr. Wu and pour cold water on him.

Mr. Wu was imprisoned for more than nine months in the Tiebei Detention Center, however in 2001, the Sifangtai District Police Department released him, after extorting 3000 yuan from him.

In December 2001, Mr. Wu was arrested at a truth clarification materials production site by the CCP authorities and was severely tortured.

In January 2002, he was sentenced to 12 years in the Mudanjiang Prison in Shuangyashan City, Heilongjiang Province, where he was locked up in the 23rd section in the 11th Ward.

The living conditions in Mudanjiang Prison are horrible, and many prisoners there carry infectious diseases. Being imprisoned for more than two years took a toll on Mr. Wu's mind and body. He later contracted a serious case of pulmonary tuberculosis which caused him to become emaciated, yet, the police paid absolutely no attention his health condition.

Only when Mr. Wu Yueqing's life was in danger did the police allow him any so-called "hospital treatment." However, while at the hospital, he was injected with some unknown drug, which caused Mr. Wu's condition to rapidly deteriorate.

One of Mr. Wu's lungs had a large, festering hole in it, and his body weight had dropped to about eighty pounds. Even though he was in such a life-threatening situation, the Mudanjiang City Prison authorities still created obstacles for Mr. Wu, including delaying his scheduled medical treatment.

Only when Mr. Wu was about to die did the prison let his family take him home. The prison administrators released him only to avoid responsibility for his death. Mr. Wu was released somewhere between late 2006 and the first half of 2007.

While at home, Mr. Wu's life was hanging on a thread. Fortunately, he had an elder sister, Ms. Wu Yuexia, a Falun Gong practitioner and teacher at the Baoshan Middle School, who encouraged him and looked after him frequently.

Having just returned home and faced with the tragedy of his elder sister's arrest (who was the only person he could depend on to look after him), Mr. Wu found it impossible to cope. As a result, his condition rapidly deteriorated, and he died on December 23, 2007.

“An Improper Thought Led to An Accident”

“Applying Truth, Compassion, Forbearance in My Work as a Schoolteacher”