(Clearwisdom.net) The attacks launched by pro-Chinese Communist Party individuals upon Zhang Xi, a Falun Gong practitioner, when she was distributing the Epoch Times newspaper in the suburbs of Warsaw, have evoked a strong response from government officials in Poland. At noon on June 12, 2008, Mr. Andrzej Czuma, a senior MP of PO, the ruling Polish party, held a press conference on the incident in his office in the Polish Parliament. The press conference was also supported by Mr. Pawel Poncyliusz, MP of PIS and the former First Vice Minister of the Ministry of Economic Affairs of Poland. PO and PIS are the two biggest political parties in Poland. 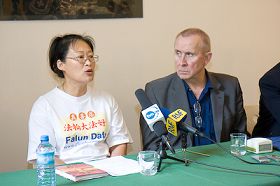 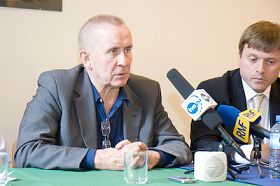 Mr. Andrzej Czuma, a senior MP of PO, at the press conference

At the press conference, Zhang Xi told about her experience of harassment by the pro-CCP individuals on two occasions when she was distributing the Epoch Times newspaper at the GD Trade Centre in the suburbs of Warsaw on June 7, 2008. The harassment included verbal insults, physical attacks and even death threats, as well as the tearing up of the Epoch Times newspapers. According to members of the local Chinese community, the violent offenders were working for the Chinese Embassy. Ms. Zhang said, "I have won respect from the local Chinese during my voluntary work of distributing the Epoch Times for the past two years. However, the attacks upon me made people feel like they were living under the rule of the CCP. This challenges the freedom and democracy of Poland."

Mr. Andrzej Czuma solemnly pointed out that Falun Gong should enjoy freedom in Poland because Poland is a country where human rights and civil rights are respected. He said, "We demand that extensive investigations into the incidents of harassment be conducted and those offending persons be held responsible. It seems that the Chinese Communist Party is likely launching the attacks upon the overseas Chinese Falun Gong practitioners around the world. We have the means to deal with the assailants if they should be found out, through the investigations, to have worked through the diplomatic channels of the Chinese Communist Party."

Mr. Pawel Poncyliusz, MP of PIS and the former First Vice Minister of the Ministry of Economic Affairs of Poland, was not able to attend the Press Conference, but he and Mr. Andrzej Czuma made a joint appeal, formally urging the Polish Ministry of Foreign Affairs to investigate the incident and make an overall investigation into the background of the incident.

Hanna Foltyn-Kubicka, the Polish MP of the European Parliament, sent a telegraphic message to Warsaw from Brussels in support of the appeal to the Ministry of Foreign Affairs. She also wrote a letter to the CCP's Ambassador to the European Union, strongly condemning the CCP's attacks upon the Falun Gong practitioners in both the USA and Poland, and demanding that the CCP stop its persecution of Falun Gong. She appealed to the European Union for an investigation to bring the assailants to justice.

At present, the Polish police have placed the incident on file for investigation.

“Recent Activities at the Hawaii Quit the CCP Service Center”