(Clearwisdom.net) On May 24, 2008, more than 2000 Falun Gong practitioners from all over the world held a parade in Chinatown, Manhattan, NY. The parade displayed the beauty of Falun Gong and exposed the evil nature of the Chinese Communist Party (CCP). It passed on the information that more than 37 million Chinese quit the CCP. 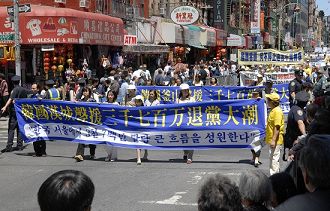 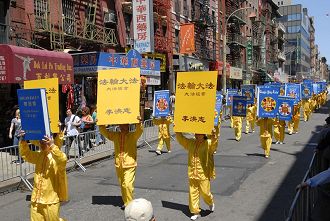 The book Zhuan Falun has been translated into 25 languages. 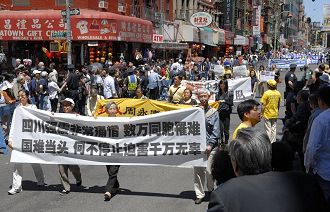 "Stop the persecution of Falun Gong when China is suffering from the natural disaster." 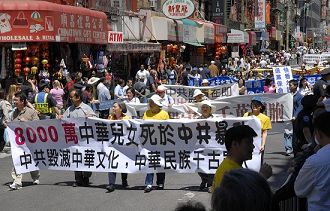 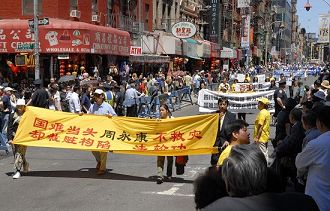 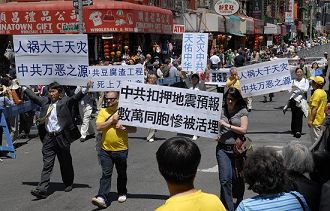 "The CCP chose not to publicize earthquake warnings; Thousands of Chinese died because of it." 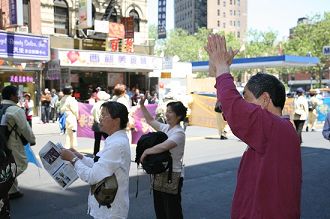 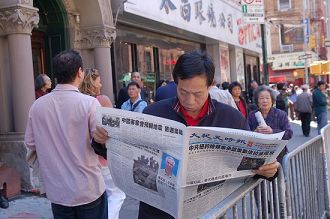 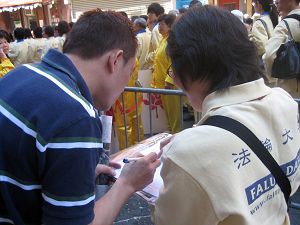 Signing petition to condemn the persecution

The Divine Land Marching Band led the parade. Practitioners displayed giant models of the book Zhuan Falun, and large banners reading "Falun Dafa," and "Truthfulness-Compassion-Forbearance." They held display boards which show the spread of Falun Dafa in the world, and photos of those tortured to death by the CCP. Practitioners also carried banners asking: "Have you thought about why the belief in 'truthfulness-compassion-forbearance' is being persecuted?" and "Why doesn't CCP stop the persecution when China is suffering from a natural disaster?" Practitioners also passed on information explaining how 37 million have quit the CCP.

Mr. Li, a Chinese visitor from Shenyang, was amazed by the parade. He took videos of the parade. When he saw the displaying board of "Falun Dafa in Shenyang," he was excited. "My home is close to this exercise site," he shouted.

Mr. Li took a lot of footage. He was shocked when he saw the photo of Gao Rongrong, who was beaten by the electric batons and eventually was tortured to death during the persecution. Mr. Li also took a lot of footage of the Nine Commentaries on the Communist Party and information about quitting the party. He said that he would show the video to his family and friends in China.

Some Chinese people quit the party on the spot. Mr. Ye, a restaurant worker, reads the Epoch Times newspaper. He wanted to know more about Falun Gong. He condemned the persecution, and signed his name to support Falun Gong. He also quit the Communist Youth troupe.

To let more people know about Falun Gong, practitioners will continue to peacefully clarify the truth. Practitioners want to awaken people's conscience so that the persecution will end as soon as possible.