Congressmen Applaud Falun Gong at Festival of the Arts (Photo)

The "Communiversity 2008 Festival of the Arts," sponsored by the Arts Council of Princeton and Students of Princeton University, was held on Nassau Street in downtown Princeton New Jersey on the afternoon of April 26, 2008. Falun Gong practitioners from New Jersey participated in the festival. 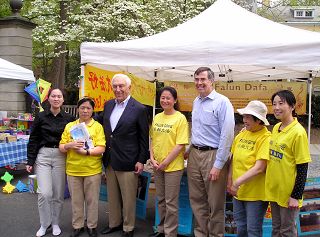 It was a nice day, and crowds of people visited the festival. Falun Gong practitioners set up a display and banners reading "Falun Dafa Is Good" and "Truth-Compassion-Tolerance" at their booth. Some practitioners demonstrated the Falun Gong exercises wearing golden practice suits. Their smooth and beautiful movements, along with the music, attracted people. Some practitioners distributed fliers and exposed the persecution of Falun Gong by the Chinese Communist Party (CCP).

Many people were shocked upon hearing about the persecution and condemned the CCP. Some Chinese quit the CCP on the spot. Many showed great interest in Falun Gong and took information with them so they could find out more.