Starting on March 27, 2008, Amnesty International's French Youth Group held activities at the Centre Pompidou in Paris for three days to call on the Chinese regime to respect the Olympic spirit and improve its human rights situation. The French Falun Gong Association and the French Branch of the Coalition to Investigate the Persecution of Falun Gong (CIPFG) were invited to participate in these activities.

During the activities, Amnesty International rented a double-decker bus for two Falun Gong practitioners who live in France to share with passers-by their personal experiences of being illegally detained and persecuted. The cruel persecution they suffered and the great compassion and tolerance they demonstrated touched many kindhearted French people. 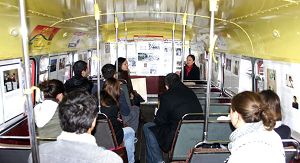 Falun Gong practitioners in the front row explain to people about the cruel persecution they personally suffered in China.

Two French youths who later introduced themselves as Nacer and Arnaud were deeply moved by the stories of the Falun Gong practitioners. During the session, they asked to leave for ten minutes. Afterwards, they brought back two bunches of roses and presented them to the practitioners. 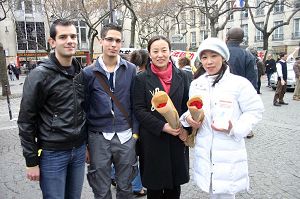 When interviewed later on, they said that though the persecution occurred far away, the atrocities touched the bottom of their hearts and they believed that the sorrow could be felt by people around the world.

These two young man added that since primary school, they have known about the Chinese regime's serious persecution of its people. However, they used to think that the persecution was simply against freedom of the press, freedom of thought and freedom of speech and they did not know that over 100 million people have suffered such atrocious persecution because of their personal belief. They also said that they sensed that it was time they took action to help those being persecuted. 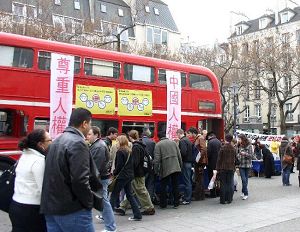 People sign the petition prepared by Amnesty International and the CIPFG.

Nacer and Arnaud said that after realizing the seriousness of the Communist regime's persecution against Falun Gong and based on the understanding that France is a nation of human rights, France should set an impeccable example for the whole world. They said that it is unacceptable to see people suffer persecution because of their belief.