Finnish Performer: "We Have Never Seen Anything Like This" (Photo)

On March 31, 2008, the Divine Performing Arts successfully presented its second show at Tampere Hall in Finland. Mr. Eero Lehtinen, a former marketing manager who also worked as a clown all over Finland, came with his wife to see the show. 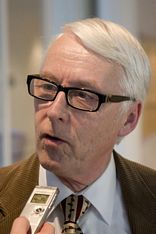 Eero Lehtinen, a former marketing manager, said that it was the first time he had ever seen this kind of live performance

Mr. Lehtinen and his wife both liked the show very much. Mr. Lehtinen said, "This was the first time we had ever seen this kind of live performance. It was very fine, really great! We've never seen such a variety of gorgeous stage costumes, really beautiful and touching!"

Mr. Lehtinen highly praised the performers' skills and the traditional Chinese culture they presented. He said, "These Chinese artists! Of course we have such dancers in Finland--but the DPA performers are so flowing and wonderful. When they jump up high, they land so silently. That was really wonderful!"

Mr. Lehtinen appreciated the backdrop and the three-dimensional projections on the screen. He said, "I liked the backdrop very much. It went very well with the dance performances. For instance, when the birds became suns and then transformed back into birds when they were shot down, and there was only one sun left [referring to the dance, "Lady of the Moon"]--that was what was needed."

"The words in the songs were so touching. And it was nicely done, so that we could read the lyrics in Finnish at the same time. I am amazed. I wonder how everything was so perfectly synchronized. We have never seen anything like this. We loved it and will definitely come back next year."

Mr. Lehtinen said that he felt it was helpful to have this kind of show in Finland and other countries: "It is valuable to show people about history."