In the Year of Our Lord Two Thousand and Eight

, the Chinese communist regime has been granted the honor of hosting the 2008 Olympics in Beijing with the provision that the nation improve its treatment of Chinese citizens; and

, human rights violations have increased in China since this honor was granted; and

, the Chinese regime illegally harvests vital body organs for sale without consent from Falun Gong prisoners of conscience; and

, the Chinese regime continues to occupy Tibet and attempts to erase the cultures of Tibetans and Muslim Uighurs; and

, the Chinese regime forces women to get abortions, even in the 3rd trimester of pregnancy, to enforce the "once child per family" rule; and

, the Chinese regime supports the dictatorships in Sudan, Burma, Zimbabwe and North Korea in perpetuating slaughter upon their citizens; and

, the Chinese regime prohibits freedom of religion, and those who practice their faith and beliefs in underground churches are arrested, imprisoned and persecuted; and

, the Chinese regime prohibits freedom of speech, controls the population with private and public surveillance and censors information on the Internet; and

, the Chinese regime prohibits freedom of the press and imprisons more journalists and reporters than any other country in the world; and

, the Olympic Charter calls for the Olympic Games to represent "respect for universal fundamental ethical principles" and "the harmonious development of man, with a view to promoting a peaceful society concerned with the preservation of human dignity." It states that : "Any form of discrimination with regard to a country or a person on grounds of race, religion, politics, gender or other reason is inconsistent with membership in the Olympic Movement"; and

, the Human Rights Torch Relay is an international campaign that seeks to bring an end to all human rights abuses against the people of China and is dedicated to ending human rights abuses by the Chinese communist regime, to reestablish the mandate of the Olympic Charter and to preserving the true Olympic Spirit; now, therefore, be it

In Senate Chamber Read and Adopted March 4, 2008 In Concurrence

Attest: Glenn Cummings Speaker of the House of Representatives

In Testimony Whereof, I have caused the seal of the State to be hereunto affixed. Given under my hand at Augusta, this sixth day of March, in the year two thousand and eight. 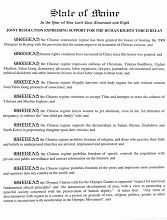 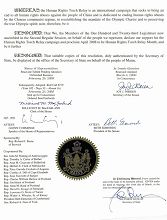 “Studying the Fa Well and Doing the Three Things Well”