On the afternoon of April 12, 2008, a forum on the Human Rights Torch Relay (HRTR) was held at the Marriott Hotel near Miami Airport. Florida HRTR delegates, a congressman, members of the Cuban Liberty Council, human rights lawyers, Falun Gong practitioners who had been imprisoned by the Chinese Communist Party (CCP) regime, and representatives of the World Organization to Investigate the Persecution of Falun Gong (WOIPFG) participated in the forum and condemned communist tyranny and its persecution of human rights. The CCP's escalation of the persecution of Falun Gong practitioners and dissidents, under the name of 'preparing' for the Olympics, has caught worldwide attention. The attendees of the forum supported the Human Rights Torch Relay coming to Florida and issued a joint declaration on the CCP's violation of human rights before the Olympics. 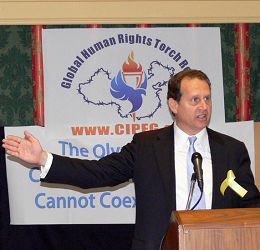 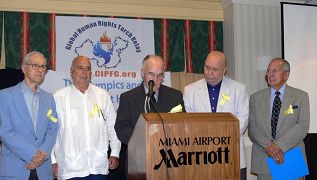 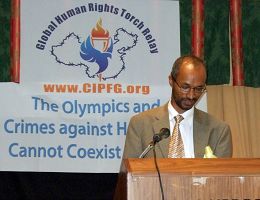 Maureen Gamrecki is vice-president of an international bank. She is the Florida delegate for the Human Rights Torch Relay. She introduced the mission and objective of the HRTR. The Coalition to Investigate the Persecution of Falun Gong (CIPFG), consisting of more than three hundred political leaders, lawyers, doctors, religious leaders, and human rights advocates, started the HRTR to stop the CCP's persecution of Falun Gong, especially the CCP's atrocity of organ removal from living Falun Gong practitioners for profit. Crimes against humanity and the Olympics cannot coexist in China. Through the global Human Rights Torch Relay exposing the CCP's atrocities and crimes against humanity, the international community is called on to not allow the Olympics become the "bloody Olympics." The Human Rights Torch was ignited in Greece last August and has been relayed to twenty-six countries and eighty cities.

Congressman Lincoln Diaz-Balart gave a speech and expressed his support of the Human Rights Torch Relay. He indicated that the CCP's live organ removal from Falun Gong practitioners showed its nature of bloody cruelty and it was hateful for the International Olympic Committee to let such an inhuman regime host the Olympics. He compared the 1936 Olympics in Germany with the coming Beijing Olympics. He indicated that standing alongside Chinese people being oppressed was an honor and such humanitarian support would continue.

Congressman Diaz-Balart also signed the petition for the "Millions of Signatures Global Campaign" initiated by the CIPFG to express his support of the call for an end of the persecution of Falun Gong before the 2008 Olympics.

Members of the Cuban Liberty Council, Horacio Garcia, Luis Zuniga, and Paul Alcazar attended the forum and gave speeches. Mr. Alcazar compared the Cuban tyrannic regime with the CCP and said the CCP regime was similar to the Taliban in Afghanistan, in terms of usage of torture and brainwashing. ?

Lawyers Pedro J. Fuentes-Cid and Robert Martin Perez, and doctors Alfredo G. Menocal and Angel Cuadra from Consejo Presidio Politico Cuba were political prisoners of Cuba. They were imprisoned from six to twenty-eight years in Cuban communist prisons. In their speeches, they mentioned that China has the most seriously oppressed people and there is no freedom of expression, information or political rights. They called on all those objecting communist tyranny to be united.

Ms. Zhang fled China last year to the USA. She narrated her whole family's suffering from the CCP's persecution due to their practicing Falun Gong. Her parents were imprisoned for two years and her father was beaten until he suffered a broken rib and hearing loss. Police even poured boiling water over her father's head. Her younger brother was imprisoned for six years and was stripped naked and forced to stand in the snow in winter. Her brother was shackled with forty-pound shackles. He was hung up on a wall for seven straight days and nights. Police shocked him with electric batons and his whole body was covered with bruises and cuts. Ms. Zhang was imprisoned in forced labor camps and brainwashing centers several times.

Mr. Frehiwot Samuel was a judge in the Ethiopian Supreme Court and chairman of the State Investigation Committee. He is now a human rights lawyer. He said that everyone, including the government, organizations and individuals, should pay attention to the human rights issue.

In addition, Congressman Mario Diaz-Balart of the 25th District sent a letter to express his regret for being unable to attend the forum. He praised the efforts of the forum to let people know the inhumane treatment of Chinese people.

The attendees put on yellow ribbons voluntarily to support the CIPFG-initiated Human Rights Torch Entry into China and all those Chinese people who were persecuted by the CCP or sought freedom, justice and human rights.

To close the forum, the attendees signed a joint declaration to strongly condemn the CCP tyranny's escalation of persecution upon the coming of the Olympics. The declaration demands that the CCP release all prisoners of conscience, including Falun Gong practitioners, and stop live organ removal from practitioners. The joint declaration will be sent to the International Olympic Committee, the US State Department and the Chinese government.