The Circus Theater was filled to capacity for all the Chinese Spectacular performances in Stockholm. Many of the theatergoers gave the show rave reviews.

A short time ago, an official with the local cultural bureau received a phone call from an official from the Chinese Embassy in Sweden. To try to prevent the Divine Performing Arts from presenting the Spectacular, the Chinese official threatened that allowing the show to go on would negatively impact diplomatic relations between the two countries. This incident was widely reported in the major media in Sweden and people have reacted strongly. In response to the Chinese Embassy official's veiled threat, seven Swedish Parliament members have made a joint announcement: "Seven Parliament members will go to Konsert & Kongress to see the Chinese Spectacular."

Mr. Andreas Norlen, Member of Parliament and Doctor of Law, commented on the Divine Performing Arts on Tour. He believes that whether it is in China or elsewhere in the world, people need the revival of genuine traditional Chinese culture. He said, "I hope to see the performances that represent traditional Chinese culture, which existed before the Chinese Communist Party came to power. I expect to listen to the music and watch the dances and traditions that the Chinese Communist Party has been trying to destroy. And these are all enthusiastically represented in the Divine Performing Arts performances." Mr. Norlen said that when Swedish ancestors were still wearing animal skins as clothes and using axes to hunt, China had already developed a highly advanced culture, wondrous inventions, superb spiritual pursuits, and rich literature. "So the Chinese culture, in many aspects, is ahead of the world." 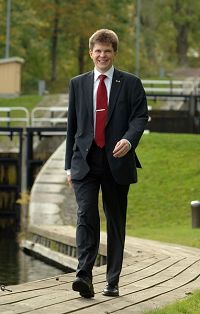 Hope that Chinese people can regain themselves

Mr. Norlen said that the Chinese Communist Party (CCP) first appeared over one century ago in Europe, but it was discarded a long time ago. Because it is completely against ancient Chinese culture, the CCP, once it came to power, immediately started to destroy traditional Chinese culture. He believes that what the CCP has been doing is even more destructive than weapons. He said, "People can work against weapons and soldiers. But if it (the CCP) can alter people's souls and wisdom, and control and enslave people's minds, it (the CCP regime) will really have succeeded as a dictatorship. The CCP destroys the traditional culture and everything from history, then replaces them with new thinking and uses it to change people's thinking. This is how it gains control. I hope that Chinese people can stand up against the persecution and stand up side-by-side with the world's great nations! You do not need to be represented and suppressed by the CCP, which is, in itself, illegal!"

We are sorry to see this interference with traditional culture

Mr. Norlen believes that the world tour of the Divine Performing Arts has played an important role in cultural exchange among the world's nations. He said, "Now the Chinese Communist Party tries to wipe out traditional culture and the contributions that China should have made. I think that this is regrettable." He believes that if cultural exchange among the world's people had assumed a different role, it would have played a very active role relating to the commonalities of people, the globalization of the world, and the better understandings among nations.

The voice of a Linkoping resident: I know the Divine Performing Arts performance will be excellent

The contact person for the Chinese Spectacular organizer said that there were only a few tickets left one week before the show. People have been waiting for the performance with curiosity and great expectation. Because this was the first time that the Divine Performing Arts on Tour has come to Sweden, Linkoping artists thought that the show should be performed several more times. It was expected that this performance would live up to Linkoping's high expectations: "I know what kind of performance I will see. I know that this will be an excellent performance! Besides, I know that the theater will be packed."

Linkoping is the fifth largest city in Sweden with 130,000 residents. Located in the south of the country, it was established in 1230, and it is a center for high tech and higher education. In 1993, Linkoping was awarded the title "Best Swedish City" based on the city's economy and enterprises. This award was given based on the votes by a major weekly business journal.

The highly advanced City of Linkoping still keeps the flavor of a unique small town. Bicycle routes circle the city. Among students, riding bicycles to school has become the fashion. Linkoping has many parks. Whenever it is warm, the whole city is enveloped in green. People here like sports. Jogging routes, harbors, lakes, and outdoor or indoor tennis courts are good places where people exercise. The large number of movie theaters, music halls, libraries, arts museums, stores, and hotels have made people's daily lives even fuller.