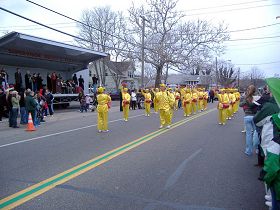 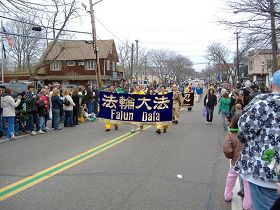 Each parade covered about a mile. Practitioners demonstrated the exercises and played the waist drums, which the local people applauded. Thousands of people watched each parade, and they were very happy to accept Falun Gong flyers and paper lotus flowers.

This was the first time for many local people to hear about Falun Gong. They were very interested. The organizer of the parade was pleased to have the Falun Gong group in the parade and thanked them for participating.

On the other side of the world, Chinese security agencies have been conducting mass arrests of Falun Gong practitioners throughout China in recent months as authorities step up efforts to "stamp out" the practice in advance of the Olympic Games. Practitioners are doing their best to let more people learn the truth and recognize the true nature of the Chinese regime.

“Western Practitioner: "Everyone is Waiting to be Saved"”