Taiwan University of Art Professor: It Was As If I Was in Heaven (Photos)

On the afternoon of March 15, 2008, the Divine Performing Arts (DPA) of New York presented its first Chinese Spectacular at the Taipei International Convention Center. The show drew a full house. Enthusiastic applause was heard throughout the show. 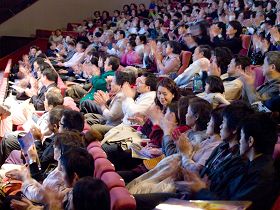 Audience at the Chinese Spectacular 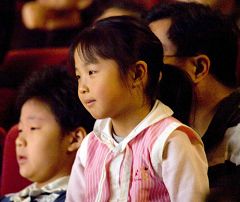 Audience at the Spectacular

Chinese Art Association Council Member: Our Thanks to the DPA for Such a Great Show

Ms. Tseng Man-Yun, council member of the Chinese Art Association, thanked the DPA for such a great show. She was totally carried away by the first program "Nymphs of the Sea." She was amazed by "Water Sleeves" and the fan dance ("Lightness and Grace"), saying, "The beauty of the dances reached a spiritual level. They touched my heart. The show presented traditional Chinese art in a profound way. It's marvelous to share the message of Truth, Compassion, and Tolerance. I hope more people get to see such an impressive show. I would like to come back next year."

"Chinese culture is very profound. The DPA exhibits the true meaning of the culture and imbues its performance with a very serene, peaceful, and graceful feeling. Normally it's hard to convey a feeling of serenity through dancing." In Ms. Tseng's opinion, learning aesthetics promotes a healthy and refined personality, but a sense of aesthetics is missing in today's society. "Without truthfulness and compassion, something is missing in a person's personality." She was moved by the fact that the show presented the beautiful aspects of Chinese culture so artistically.

Professor at National Taiwan University of Art: Its Beauty Put Me in Heaven

Lin Bao-Shan, a professor at National Taiwan University of Art, said, "The combination of the background projection and the dances is great. The hosts did a good job. The artists are so young and they dance so well." 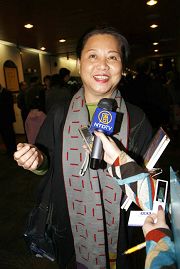 Lin Bao-shan, professor at the National Taiwan University of Arts.

Ms. Lin was impressed by "Nymphs of the Sea," "Lady of the Moon," and "Descent of the Celestial Kings," noting that the show presented incidents from China's history and different ethnic groups through dance."It's great to see the beauty of Chinese culture, which is totally different from Western culture. I can see immediately the goal of the show is to present the inner meaning of the Chinese tradition."

Ms. Lin thinks the DPA's performance is very educational for students that are majoring in dance and the arts. "The beautiful costumes coordinated very well with the stories and characters in each piece." She said she felt like she was in heaven.

Professor at National Chengchi University: The DPA Presents Culture that Represent the Power of Righteousness

Professor Tseng Chun-Hai of the National Chengchi University said, "The DPA brings out the desire of traditional culture in our hearts. It provides good cultural education for the young generations. The DPA presents the kind of culture that represent the power of righteousness."

Tseng lived in New York for a year and was a regular show goer. He praised the show, "The DPA presents the inner meaning of Chinese culture with the form of art and makes it livelier."

Tseng teaches Chinese philosophy and aesthetics. He thinks Chinese culture is the most systematic of all and can be understood, absorbed, and transformed in an orderly fashion. He considers the Chinese Spectacular "a lively path for everyone to feel Chinese culture and to promote Chinese culture." "China has a 5000-year history and profound culture, which is worth discovering. In human civilization, the Chinese, western, and Indian cultures run neck and neck. We should be confident in our culture."

Taipei National University of the Arts Professor: Every Program Is Fantastic and Unique

Chien Ming-Yen, professor at Taipei National University of the Arts and a top violinist in Taiwan, said every program was fantastic and unique. The Chinese Spectacular does very well in visual and sound effects. The traditional Chinese culture the DPA presented was very educational for children. Chien wished the show was longer. Chien brought his daughter. She said the show was wonderful and she wanted to come back next year.