Exclusive Interview with Mr. Huang Chaohu: All Artists, Asian or Western, Can Get Inspiration from This Show (Photo)

Mr. Huang Chaohu, a member of the Asian Academy of Art, president of the International Watercolor Artists Union, and a visiting professor at Princeton University, expressed his feelings in a recent exclusive interview after attending the Divine Performing Arts Chinese Spectacular in Taichung City. The following are his comments. 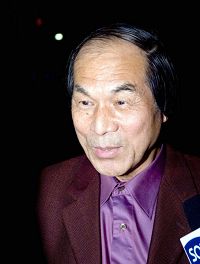 The Spectacular Deeply Amazed and Touched Me

This is the first time I've seen the show. The show deeply surprised me in many ways--the colors, music, dances, backdrops, and the clothing. More importantly, my soul was moved.

Normally, the first performance of a show should excite the audience with vigorous dance and strong rhythm. However, the beginning program of the Spectacular, "Descent of the Celestial Kings," calmed the minds of the audience in a dignified and magnificent manner. It helped the audience calmly watch and enjoy what followed, and provided food for thought. The Divine Performing Arts not only supplied the audience with delightful visual and audio sensations, but also offered rich spiritual perceptions. It gave me feelings of wonder and perfection.

Every Moment of the Dance is an Artistic Masterpiece

Currently, behavioral and installation art are the popular trends. I feel that all the dances of the Divine Performing Arts are continuous live paintings. If we could freeze every moment of the performance from the beginning to the end, they would become the best artistic masterpieces of installation art. The style, the color, the background screens, the light projection, and the music for the dances are all very special and surprisingly good! Whether Asian or Western, all artists can get inspiration from watching the show.

The Divine Performing Arts combined the traditional oriental arts--which focus on the harmony between heaven and man--with Western arts and the essence of modern technologies. The performance reflects the traditional perspective and permanent values of mankind, and spreads strong artistic and moral values. Generally speaking, it is difficult for westerners to feel or understand oriental arts. However, Divine Performing Arts resonates with people of different races and from different cultural backgrounds, which is really quite wonderful.

Currently, many Western philosophers and artists think that some areas of research have come to a dead end. They are starting to focus on Asian concepts, such as Dao, Zen, and other philosophies. I think that the arts and the content demonstrated by the Divine Performing Arts provide good directions for their research.

The colors from the East are beyond the real world, and they are "philosophical" colors. On the other hand, Western colors are "scientific" colors, mixing percentage and brightness. That is, if we want to print something in a certain color, the color can be broken down into the percentages of red, yellow, and blue. However, Asian colors do not possess this quantitative feeling. They represent Yin-Yang theory. Red, yellow, blue, white and black represent five different natural elements, and spring, summer, autumn, and winter seasons. Asian colors resonate closely with the minds and the thoughts of people.

Recently, I spent a lot of time on watercolor paintings, which are more colorful and variegated than traditional Chinese ink or watercolor paintings. So I am very sensitive to the colors presented by the Divine Performing Arts. I noticed that a lot of yellow and purple colors are used, which are distinguished colors and indicate nobility of the show. Yellow is the most common color in the Buddha school. In the Forbidden City and the National Palace Museum, yellow was widely used. Taoism likes to use the purple color. Therefore, the colors for the Divine Performing Arts are extremely lofty and honored.

In addition, many other colors are harmoniously blended in. The color matches are in an eastern style. Eastern colors are gentle and harmonious. The combination of eastern music and color coordination immerse the senses in space and rhythm.

The bright stage is another special characteristic of the Spectacular. There is no strong contrast. What it demonstrates are brightness and beauty, which uplifts people and brings them joy.

Presenting the Purest Beauty of the Human Spirit

The most commendable characteristic of the Spectacular is that the performance is not only an entertainment event. In this modern society, the Divine Performing Arts teaches people with righteousness, and purifies people's souls. It sets the standards to distinguish good and bad with beautiful clothing, music, dances, and righteous behavior. The performance manifests the purest beauty of mankind, "Truthfulness, Compassion, and Forbearance."

The benign messages delivered by the Divine Performing Arts, including love and gratitude, helps me to understand that common people in the society are genial. On the other hand, the performance also inspires people to treat others with truthfulness, compassion, and tolerance. Through the performance of the Divine Performing Arts, the message can be delivered to every corner of the world. The international community will then become peaceful and calm. The show will benefit all people, no matter what their ages are.

In Taizhong City, we hold a watercolor painting festival to promote the oriental spirit and paintings. We also hold exhibits in foreign countries. It is relatively easy to hold a painting exhibition. I cannot imagine how difficult it is to hold a big performance like this. I really appreciate the great effort that artists of the Divine Performing Arts put in. In addition, I feel that every artist has the responsibility to maintain the existence of good things for our descendants. We really hope that the Divine Performing Arts will return to Taiwan next year.

Mr. Huang's wife is also a painter. Originally from Busan City, Korea, Mrs. Huang deeply regrets the cancellation of such a good show in her hometown due to interference by the Chinese Communist Party. She said, "The Divine Performing Arts perform spiritual dances. I wish my relatives at home could also see the show."

Mr. Huang Chaohu has been involved in artistic creation for more than 40 years. His paintings received seven awards at international art competitions. He has five painting collections and is the author of six books about painting. Currently, he is the president of the International Watercolorist Union, and a visiting professor at Princeton University.