(Clearwisdom.net) "This is outrageous," declared Helmut Pauli, Managing Director of the Tonicale Concert Agency in Munich, Germany. Since he agreed to book the Chinese Spectacular at Munich's famed Prinzregenten theater, he says, scarcely a day has gone by without him getting a phone call from the Chinese consul in Munich or her staff. "They are threatening me and my company!"

Mr. Pauli is a famous activist in the German music community. He has founded several associations and organizes two or three concerts in Munich every week.

Chinese Consulate officials have called the music agency many times. Later, the Chinese vice consul Wang Yanmin and a co-worker went to the office of Tonicale on March 11. Wang asked Mr. Pauli to cancel the Chinese Spectacular, which will be held in April. The reason was that the show is sponsored by the Falun Dafa Association in Germany.

Among the messages the Chinese diplomatic mission delivered to Mr. Pauli are that should the show go on, Pauli might never set foot on Chinese soil again. Also, he was told that he would be blacklisted from doing business with Chinese partners, he says.

"I've seen the show in Frankfurt, and there is nothing offensive in it in my point of view," says a Tonicale employee who made arrangements for the show in Munich.

"It is to the show's credit that the President and the Vice-President of the European Parliament, as well as several German political representatives, sent congratulatory messages that are included in the program handout," she added.

The Chinese Spectacular by Divine Performing Arts has been held in the United States, Germany, the Netherlands, the U.K., France, Austria, Belgium, the Czech Republic, Switzerland, and Slovakia. The company is set to visit 60 cities around the world and hold more than 200 shows by the end of May. From March 14 to 17, it is to perform in Berlin and Hamburg, and in April, it will come back to Munich.

According to employees at Tonicale, Chinese vice consul Wang Yanmin threatened that if the show were to go on, the Chinese consulate will ask all the Chinese people living in Munich not to go to any activities held by Tonicale. The vice consul said that the show would hurt the relationship between China and Germany. In spite of this, the Tonicale Music Agency refused to cancel the show.

Chinese officials have attempted to interfere with Divine Performing Arts' productions at many of its stops, including most recently in the Czech Republic, where three shows were put on at the Prague Congress Centre. In Prague, the Chinese Embassy published a front-page advertisement in the local Chinese language press, warning people not to attend the show. Czech TV, the country's largest television station, reported in prime time that they too received a letter from the Chinese Embassy, this one warning them not to cover the performance.

According to a local TV station on February 14, the Chinese Student Association in Ruhr has asked Chinese students not to go to Divine Performing Arts' Chinese Spectacular in Duisburg. 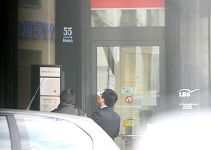 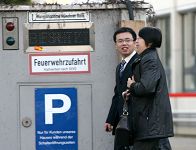 On March 14, Wang Yanmin, the Chinese vice consul in Munich, leaves the office of Tonicale Music Agency with her co-worker.