I offer my congratulations to the New Tang Dynasty Television and its producing partner Divine Performing Arts on the occasion of the Fifth Annual Chinese New Year Splendor being performed at Radio City Music Hall.

Your commitment to bringing Chinese history and culture to the public through the celebration of the Chinese New Year is commendable. I applaud your efforts to share China's culture and make it accessible to the multi-cultural population.

Congratulations on your continued success. 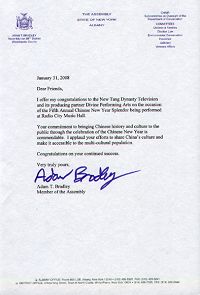