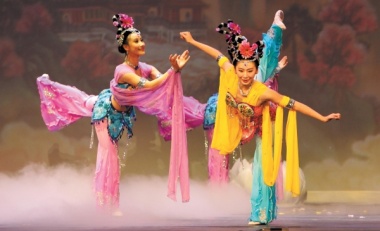 As the world grows smaller in the wake of global media, China is hot. The recent Olympic Games in Beijing underscored the country's emerging presence on the world stage.

Interest in Chinese culture is burgeoning, and the world tour of Divine Performing Arts (DPA) brings some of the country's ancient artistic forms -- such as dance, music and elaborate set visuals -- to eager audiences. The New York-based group comes to Music Hall Dec. 23 for a single performance.

Speaking by telephone from a stop in his Minneapolis hometown, DPA's Master of Ceremonies Jared Madsen says the show essentially embodies 5,000 years of Chinese culture through principles, stories and teachings that spanned generations, at least until Communism took hold in 1949.

As is expressed in DPA's name, Madsen says the Chinese view their culture as being a divine one, a culture passed on by the divine -- a notion resulting in socio-political conflict. According to Madsen, much of the program contains material you won't see in China.

"The Communist party has shown a history -- you know, we've read about this in newspapers for the past several decades -- of all the different suppressions of various spiritual groups," Madsen says. "(With DPA), you see pieces based in Taoism, we have pieces based in Buddhism. All of these are very important pieces that make up Chinese culture, and to the Chinese government, all of these, in an atheist regime, are not acceptable to them."

Dance in particular reflects concepts put forth in Falun Gong, an ancient spiritual exercise practice. It's movement-based, much in the way Tai Chi and yoga are, but guided by principles of truthfulness, compassion and tolerance or benevolence. (Madsen says these are approximate translations.) DPA performers practice it, and many of DPA's choreographers draw inspiration from it. According to a 1998 Chinese government study, there are about 100 million people who practice Falun Gong, Madsen reports.

"On July 20, 1999, it was actually outlawed in China and has been persecuted ever since," he says.

Divine Performing Arts seeks to unite people through the sharing of traditional Chinese cultural arts that have suffered greatly under oppressive political regimes. DPA is comprised of artists outside China who are working hard to revive these art forms. The artists, most of whom are ethnically Chinese, come to DPA from all over the world where they spend half the year painstakingly creating an elaborate show and the other half touring and performing their breathtaking works.

Madsen finds synergy on deeper levels, too. He spent part of his senior year of high school in China, returned there for most of his university studies and now holds a Master's degree in Chinese medicine.

He waxes poetic about how yin and yang principles can be applied to the body, but they can equally be applied to everything in life. He cites themes in classical Chinese books, such as, "The first way to good health is to have a benevolent heart."

Madsen is fluent in Chinese and was offered this gig after working for an independent Chinese television station. Here, his main role as emcee is "to be a bridge with the audience," to provide a bit of background and cultural insights.

"Even principles that permeate Chinese culture -- loyalty, respect for parents, veneration for the divine, these kinds of things -- you can connect with many Chinese principles," Madsen says. "Actually, many cultures around the world have that as well, so it shouldn't be that foreign for most people."

“Ascending in the Process of Validating Dafa (Part I)”