(Clearwisdom.net) On the afternoon of November 4, 2008, at 2:00 p.m. The Taiwan Falun Dafa Association held a press conference regarding the five-day visit of Chen Yunlin, head of Chinese Communist Party's (CCP) Association for Relations Across the Taiwan Strait, and several CCP officials who arrived in Taiwan on November 3. The theme of the press conference was "We Welcome Mr. Chen Yunlin and Others to Taiwan to Quit the Chinese Communist Party" and "Disintegrate the CCP, End the Persecution." The press conference was held at the square in front of the Taipei Railway Station. It aimed to expose the CCP's brutal and evil nature, and to call on CCP members to take this precious opportunity to quit the CCP for their own safety. 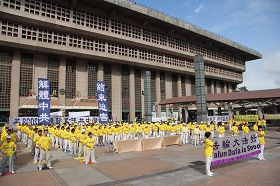 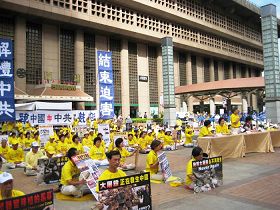 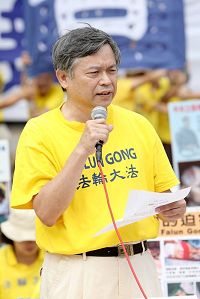 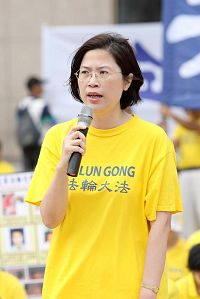 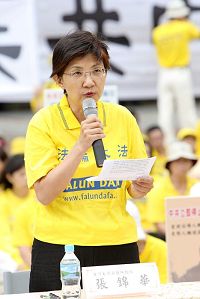 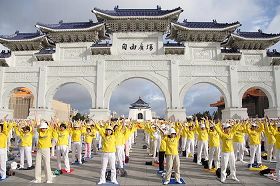 An hour prior to the press conference, more than 200 practitioners demonstrated the five exercises in front of the square. Many tourists stopped to watch. An older man especially walked over from a bus station to ask for Falun Dafa introductory material and said that he would go home and read it carefully with his glasses on. Some people took pictures. As one lady looked at all display boards about the persecution, she wiped tears off her cheeks from time to time. Some people suggested that more, similar activities should be held, so that the whole world would know that many people in Taiwan practice Falun Gong.

After the exercise demonstration, the Divine Land Marching Band performed pieces such as "Falun Dafa Is Good," "Buddha's Grace and Holy Melody," "Fa Rectifies the Universe," and "Deliver Precious Gifts." The vigorous and majestic music resounded to the skies.

At the press conference, President of Falun Dafa Association Chang Ching-hsi spoke about the CCP's inhuman persecution of Falun Gong practitioners in China since July 20, 1999. He pointed out that the persecution started with the media's overwhelming and slanderous propaganda, and then utilized the most cruel and evil methods in history. Officially, more than 3194 Falun Gong practitioners have died as a result of the persecution. An unknown number of practitioners have had their organs harvested and died in the process. Even more have been detained in forced labor camps, have stayed away from home to avoid the persecution, and have suffered economically, spiritually and physically.

Chang Ching-hsi said that, even though the CCP has mobilized China's strength in its persecution of over hundred million Falun Gong practitioners, since the persecution started, Falun Gong's contributions to society in purifying people's minds and souls and upgrading morality has earned it 1540 awards and proclamations from countries around the world. Practitioners' human rights have been supported by 2550 petitions signed by people from all walks of life and 234 resolutions passed by congresses and Bar Associations in different countries, including the resolutions passed by the largest Bar Association, the National Bar Association of the Republic of China, and the legislative yuan in Taiwan.

But the persecution is still going on, and the CCP has even harvested organs from living Falun Gong practitioners and sold them to the highest bidders. Moreover, the CCP not only kills its own people but also exports poisonous milk powder, eggs, toothpaste, clothing, and toys. The only way for the persecution to end is for the CCP to disintegrate. When all CCP members withdraw from the Party and its affiliated organizations, the evil Party will naturally disintegrate.

Mr. Chang Ching-hsi stated that we should protect basic human rights. Falun Gong, he said, does not get involved in politics. Falun Gong practitioners are cultivators that believe that "Good will be rewarded, and evil will be punished." The CCP has committed monstrous crimes and will definitely be eliminated by heaven. When heaven eliminates the CCP, all those who have vowed to devote their whole life to the evil Party will be implicated and face disaster. "Life is precious," he said. "We welcome Mr. Chen Yunlin and all the members of the CCP who came to Taiwan to quit the CCP for their own safety."

Falun Gong practitioner Professor Chang Chin-hua of the Institute of Journalism at the National University of Taiwan took the Sanlu tainted milk powder incident as an example, illustrating that the enterprise dared to take people's lives for granted, typical of the CCP's attitude. She pointed out that choosing to disassociate oneself from such blackguard company is what a person of conscience and justice should do. In the past four years since 2004, 45 million Chinese people inside and outside China have announced their withdrawals from the CCP and its affiliated organizations. The wave of quitting the CCP has become an historical trend that cannot be ignored. Chang called on the Taiwan media to fulfill their duty to report on the remarkable movement to quit the CCP, the true hope for Chinese people in the future.

The press conference concluded with the Divine Land Marching Band's performance of "Falun Dafa Is Good."