The annual Christmas parade returned to Glenelg, a seaside city in Southern Australia, on November 23, 2008. Approximately eighty groups participated in the parade, including Falun Gong. The Falun Gong contingent was praised as one of the most beautiful processions in the parade. 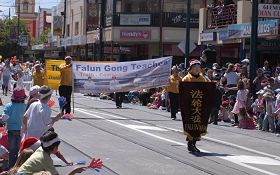 This year the Christmas parade attracted thousands of local residents and visitors. Eighty groups of different ethnic backgrounds, cultures and races, gathered on this sunny day to celebrate and share the prosperity and diversity of Australia. Among these groups were many people from Africa and Asia.

Falun Gong practitioners were invited to participate in the festivities again this year, and provided a colorful bright spot in the parade. On a beautifully-decorated float, celestial maidens and young women in Tang Dynasty costumes demonstrated the Falun Gong exercises, while an announcer introduced the principles of Truthfulness-Compassion-Forbearance. Spectators applauded enthusiastically and many people took photos and videos of the practitioners.

Spectators praised the Falun Gong procession as among the most colorful and harmonious. One volunteered said, "Falun Gong's group is the most beautiful one!"