) The Coalition to Investigate the Persecution of Falun Gong (CIPFG) initiated the Global Human Rights Torch Relay to call people of the world to pay attention to the human rights problems in China. The intention of the Relay is to stop the Chinese Communist Party's persecution of Falun Gong and other groups in China. On January 28, 2008, during the first meeting of the 7th session of the Chiayi City Council, Councilor Tsai Wen-Hsu formally proposed that the City of Chiayi support the Global Human Rights Torch Relay and recommended that the city welcome the Relay and accommodate the relay route. Councilors Tsai Yung-Chuan, Chen Hsing-Chih, Wang Mei-Hui, Tsai Jong-Fong, and David Fu signed the petition. 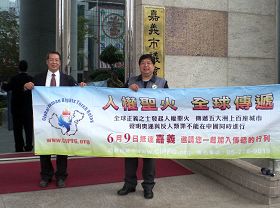 After the proposal was passed, Relay committee members in Chiayi expressed their gratefulness to the chair of the council, Tsai Kuei-Sze and all the councilors. Chiayi City Mayor Huang Min-Hui said the city will represent its residents in welcoming the Human Rights Torch that will arrive in Chiayi on June 9, 2008, and will accommodate related activities.

Councilor Tsai Wen-Hsu said he is a CIPFG member and he thanked the other councilors for passing the proposal.

Councilor Tsai said, "Human rights is a universal value, and human lives are precious. Not just Falun Gong: if there is anyone who is persecuted or treated inhumanely, any government that values human rights, or any human rights organization, should stand up and call for a stop to such persecution. Beijing advertises the Olympics in 2008 as symbolizing peace, but at the same time removes and sells living Falun Gong practitioners' organs for profit and persecutes human rights lawyers in China. To rescue these innocent lives, everyone should stand up and condemn Beijing in order to end the persecution of Falun Gong in China."

Councilor Tsai called on the people of Chiayi to welcome the arrival of the Human Rights Torch, which symbolizes peace and hope, in June. He hopes that everyone will join this meaningful activity and support the Torch Relay until the persecution stops.

The following is the text of the proposal put forward during the first meeting of the 7th session of the Chiayi City Council.

To support the Global Human Rights Torch Relay that will arrive in Chiayi on June 9, 2008. It is to suggest that the city welcome the Torch on behalf of its residents, and accommodate the route of the relay.

1. Support the Global Human Rights Torch Relay.
2. Request the City Government to represent its people in welcoming the Torch on June 9, 2008.
3. Associated departments in the city government to coordinate and accommodate the run for the Torch Relay in the City.

“Chicago Physician: "What Is Happening in China Is Our Concern Too"”