NTDTV's Chinese New Year Spectacular, performed by the Divine Performing Arts, was staged at the California Center for Arts in Escondido, Greater San Diego, CA, on January 15-17, 2008. For this special occasion, Mayor Morris B. Vance of the City of Vista and the City Council issued the following proclamation to congratulate New Tang Dynasty Television on the 2008 Chinese New Year Spectacular.

, New Tang Dynasty Television is hosting a Chinese New Year Spectacular to showcase the rich cultural history of China; and

, this extravagant show is a grand annual multicultural music and dance performance featuring many world renowned artists. The production plays on some of the most prestigious stages in the world, including New York's Radio City Music Hall and is seen by more than 600,000 people each year; and

, the mission of the Divine Performing Arts troupe is to rediscover and present the essence of true, traditional culture and to bring arts to the world that celebrate human dignity and positive values; and

Whereas, the dancers in the troupe are highly trained in Chinese classical dance, which involves great skill while performing dozens of distinctive movements, rhythms, and postures.

Now, Therefore, the Mayor and members of the Vista City Council

wish to congratulate New Tang Dynasty Television (NTDTV) on the 2008 Chinese New Year Spectacular and on your efforts to ensure that members of the Chinese American community have a cultural link to their heritage by way of the television programming offered throughout much of North America.

In Witness Whereof, we have hereunto set our hand and affixed the seal this 8th day of January, 2008 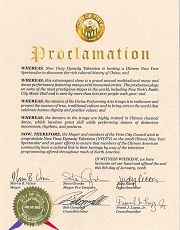 “Writer Yuanshen Chen: I Was Moved to Tears while Watching the Chinese New Year Spectacular (Photo)”