Sandy Yen is a Legislative Committee Member from the Democratic Progressive Party. On January 10, 2008, Sandy Yen signed her name on the "One Million Signatures Campaign Letter." She did so, in her election campaign headquarters, to express her protest of the Chinese Communist Party's (CCP) persecution of Falun Gong. She also asked the world's people to bravely step forward to stop this persecution.

The next day, Legislative Committee Members from the Chinese Nationalist Party Chiang Yi-Hsiung from Chiayi City and Wong Chung-Chu from Chiayi County also signed this letter to show their support of Falun Gong. They asked the CCP's regime to immediately stop the persecution of Falun Gong. They also expressed their hope that the government, legislative councils, the International Olympic Committee, and human right organizations can stop the CCP's persecution in a rational, peaceful, and democratic way. 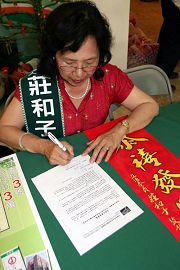 The Coalition to Investigate the Persecution of Falun Gong in China (CIPFG) launched its global "One Million Signatures" campaign on January 1, 2008, to stop the persecution of Falun Gong. On the same day, the CIPFG Asian Branch also formally started its signature campaign in Hong Kong. Volunteers in the Chiayi area have used the opportunity of the legislative election to appeal to the candidates and ask them to support the human rights of Falun Gong practitioners.

While the legislative election campaigns were going at a high speed, Chen Changhui, a member of the Asian Branch of CIPFG, invited Sandy Yen, Chiang Yi-Hsiung, and Wong Chung-Chu to sign the "One Million Signatures Campaign Letter," so as to express their strong protest of the CCP's persecution of Falun Gong practitioners. Sandy expressed that the CCP has committed monstrous human rights crimes. She said that she felt extremely pained when she learned about the long-term persecution and suppression of Falun Gong practitioners, and the organ harvesting atrocities.

Sandy Yen has repeatedly indicated that she is very well aware of the persecution of Falun Gong, and that she feels very pained to see the suffering of Falun Gong practitioners. She said that this "One Million Signatures" campaign is very meaningful. She hopes that people from different communities can all sign this letter to uphold justice. She said that people should not overlook this illegal persecution and allow the CCP to do so at will; otherwise, this would be the largest disgrace in the history of the human civilization.

Background on the CIPFG and Organ Harvesting Atrocities

The CIPFG has over four hundred members from different fields and from different countries. These members are all very accomplished individuals in their respective fields, and they are all concerned with the human rights of Falun Gong practitioners. They include politicians, government officials, religious leaders, community leaders, organ transplant experts and doctors, international human rights and criminal lawyers, non-governmental organizations members, members of the international media, and human right activists. There are four CIPFG branches, that is, the North American Branch, Australian Branch, Asian Branch, and European Branch. The Asian Branch was established on December 19, 2006; on the same day, the Asian Branch published its open letter requesting to go to China to investigate the persecution of Falun Gong.

The CIPFG branches have organized various activities around the world to stop the CCP's persecution of Falun Gong. These activities have already caught the attention of the international communities, and they have drawn attention to the CCP's crimes of human rights violations. By using the opportunity of this Olympic Games, the CIPFG members have coalesced the support of the world's people for Falun Gong and the forces that oppose the CCP's persecution into the most basic voice, the most fundamental plea, and the most widespread public will, that is, to end the persecution of Falun Gong.

David Matas and David Kilgour, two CIPFG members from Canada, published their "Bloody Harvest - Revised Report into Allegations of Organ Harvesting of Falun Gong Practitioners in China" on January 31, 2007. This report has thoroughly revealed the monstrous crimes that the CCP has committed during its persecution of Falun Gong.

Additionally, a 2007 United Nations Report included the latest report by Manfred Nowak, the UN Special Rapporteur on Torture, from the United Nations Commission on Human Rights. This report lists and summarizes actual cases of torture, including the facts about the CCP's harvesting organs from Falun Gong practitioners while still alive.

CIPFG representative Chen Changhui said, "Human rights are mankind's basic rights of living. Human lives are priceless. While the Chinese Communist Party loudly shouts about having a peaceful Olympic Games, it continues its practice of harvesting organs from Falun Gong practitioners and then selling the organs for profit. To uphold justice, we demand that the CCP immediately stop its human right violations and save innocent lives." Chen also said, "Before the start of the Olympic Games, we want to deliver the will of the people from different places of the world to the governments, legislative councils, and Olympic Committees in different countries, as well as the United Nations, the International Olympic Committee, and other international organizations. We want them to understand that 'the people's will cannot be denied.' We want them, under the support of the mighty will of the world's people, to use the mechanisms of democracy and human rights and have the courage to demand that the CCP immediately stop its persecution of Falun Gong."