Media Editor: "I Liked the Truthfulness, Compassion and Forbearance Presented in the Show" (Photos)

Boston welcomes the Divine Performing Arts (DPA) this winter. The premiere on the evening of January 10, 2008 brought genuine happiness to the audience. Many said the program was great, and some said it was too short, that two and a half hours wasn't enough.

Editor: "I Like Truthfulness, Compassion and Forbearance Presented in the Show"

Beatrice Mendez, a media editor in Boston, happened to run into a ticket selling station when doing Christmas shopping. She bought tickets for herself, her husband and her mother-in-law. After watching the show, she said the costumes were gorgeous and program very educational. She learned a lot about traditional culture. The backdrop blended into the show, and it looked like celestial maidens were flying on stage. She was interested in the portion of the show which depicted the persecution of Falun Gong in China. She said, "I liked the Truthfulness, Compassion and Forbearance presented in the show."

Beatrice's husband said, "It seemed to be very short. Two and a half hours isn't enough." 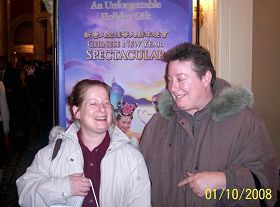 January 10 happened to be the birthday of food technician Elizabeth Painter's friend. She bought a ticket to the show as a birthday gift for her friend.

Elizabeth said, "It is beyond imagination! It is wonderful! I liked every story and every song. The costumes are gorgeous! It is way beyond my expectations. It is a wonderful birthday gift. My friend was very touched. I will tell all my friends. This is incredible!" 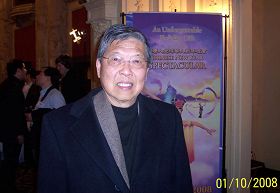 Chairman of Chinese Art Association: "I Will Tell Them (Students in His Dance Troupe) To See It."

Mr. Lin Aidi, chairman of the Chinese Art Association in Boston, and his wife watched the show. Mr. Lin said, "On hearing the announcement that the next program is Chopstick Zest, I thought it would certainly be women dancers. But it turned out to be men dancers. Woah! It was great!... It is very hard to accomplish that. It must take a lot of rehearsing to perform such neat movements. The movements were exactly to the rhythm. It wouldn't have been possible if they had practiced off and on." Mr. Lin was also very touched by and impressed with the spiritual stories. He said, "It is absolutely wonderful! I will tell them (students in his dance troupe) to watch it. They will come tomorrow and the day after."