They are the quiet, constant protesters who are always left alone by police, even during this security-mad week.

Supporters and practitioners of the spiritual movement Falun Gong have held rallies on every day of this APEC Leaders' Week in Sydney and will continue to do so until Sunday. Police have authorized all of the protests. 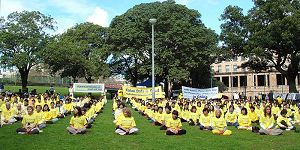 Today was their largest gathering with more than 400 people assembling in Hyde Park.

As a police helicopter buzzed overhead protesters re-enacted a play of what they called the "history of persecution" by the communist government.

Men dressed as Chinese soldiers stood behind women made-up to look like prisoners who had been badly beaten. Children, playing captives in a labor camp, lifted fake piles of bricks. And another woman, lying on an operating table, had her organs removed in a particularly gruesome, and bloody, part of the performance.

"The Chinese government are persecuting and killing Falun Gong practitioners, trying to eradicate the Falun Gong," he said.

In front of the stage more than 150 Falun Gong supporters, dressed in matching yellow or blue outfits, stood quietly in uneven lines. Many held banners calling for an end to the persecution of Falun Gong.

Another group of about 15 protesters in silk costumes danced in a circle to one side. And all around the back of the stage other protesters stood holding their banners.

Along the footpath leading the fountain in Hyde Park the group had placed a number of posters showing what they claim are the torture techniques used by the Chinese government on Falun Gong supporters.

Falun Gong are veterans of the peaceful rally. They have an information stand that is set-up in Sydney's Chinatown every day of the year. They also have other supporters handing out leaflets around the city on a constant basis.

Today the group was joined by another lobby group calling for the end of the Chinese Communist Party.

"We're trying to raise awareness of the fact that human rights are never on the APEC agenda," said the president of the Free China group, Sandra Hattingh.

“Former Government Official Mr. Ma Tianyong, from the National Security Bureau in Yingkou City, Dies as a Result of Persecution”