(Clearwisdom.net) As the Beijing 2008 Olympics approaches, China is under a global spotlight, and so are its violations of human rights, its brutal persecution of Falun Gong, and the millions of renouncements from the Chinese Communist Party (CCP). International society is scrutinizing everything that is happening in China. Some who understand the evil nature of the CCP have started a boycott of the Beijing 2008 Olympics. The twenty five million people who quit the CCP have won global support. 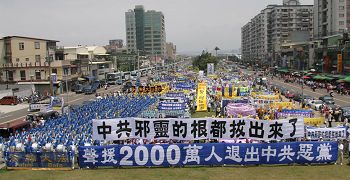 Currently in China, fewer and fewer people hold hope in the CCP. Most people are no longer afraid and use their real names to declare their withdrawals from the CCP, and to thereby help to peacefully end CCP tyranny. There are many touching stories sent to the Quit the CCP Service Center.

A list of 140 names wanting to quit the CCP came from a county in Liaoning Province. All of them used their real names and addresses. They are from three cities and 111 villages and are teachers, drug store owners and farmers.

At a central government office with eight employees, everyone finished reading the Nine Commentaries on the Communist Party and they decided to quit the CCP using their real names. The Deputy Director of that office called the Service Center and said, "We all read the Nine Commentaries and can see what the CCP really is. We won't be part of it."

Many police officers who used to persecute Falun Gong practitioners, after they learned the truth, quit the CCP and helped their families and friends to do so as well. An officer from Anhui Province called a service center overseas to quit the CCP and his family using their real names. That officer told the volunteer at the center that a high level leader at the local police station who aggressively participated in the persecution of Falun Gong had severe physical pain and mental problems. Later this leader killed himself during the New Year in 2007. This incident shocked the local society, and everyone believes that it was his retribution for persecuting good people. This officer admitted that he also did bad things to practitioners, but the Nine Commentaries saved him and he decided to leave the CCP and be a good man. He said, "thanks for giving me a second chance and saving my family of four. We use our real names to quit the CCP. I want to do something to make up for my mistakes."

An officer told a practitioner who tried to persuade him to quit the CCP, "I quit long time ago! I have seen way too much corruption. The CCP is bad to its core and tried to eradicate Falun Gong. The police are violating the laws themselves. I admire the practitioners I came across from the bottom of my heart. The CCP sentenced itself to death when they started to remove organs from live practitioners! My supervisor said God is blind if it doesn't eliminate the CCP. Who wouldn't quit the CCP once they have a chance? Besides we can use aliases. All officers in my bureau quit the CCP online. Who wants to be buried with the CCP?"

A farmer from Hunan Province walked over 60 miles to find a phone with an international long distance service carrying the names of fourteen people in his hands. He called the hot line of a global service center and gave them the names.

Hai from a big city learned about the Nine Commentaries when he read a police poster telling people to turn in the books and report the source of those books to the police. Hai thought whatever the CCP suppresses must be a good thing and looked everywhere for the book. He finally obtained a CD of the book from Hong Kong. Like finding a treasure, he watched it repeatedly over 50 times. Hai also aggressively spread the information to others. He went and bought many Nine Commentaries CDs and gave them to his friends. He said that his government friends, even though they receive benefits from the CCP, they all know the Nine Commentaries are true and secretly found channels to quit the CCP. Many other police officers who have read the Nine Commentaries refuse to carry out the CCP's orders any longer.

Awakened soldiers accelerate the disintegration of the CCP

As the 80th anniversary of the CCP approaches, a soldier declared through the bbs.futurechinaforum.org website, "I quit all CCP organizations and am no longer a Party soldier. I call upon all current and veteran soldiers to diminish the CCP's control over the military." This statement echoed greatly and many current and veteran soldiers have declared, "We are quitting the evil Party and refuse to be its slaughterers." Many military officers quit in groups.

Such actions terrify the CCP, leading it to send out 80 inspection teams to all military bases trying to save the situation. They delivered five orders to the military forbidding all soldiers to use the Internet, to receive electronic information, to have contact with political groups outside of China, to travel abroad for personal reasons, to join social groups, to participate religious activities, and to read books and journals from overseas enemies. No matter how hard the CCP tries to stop the soldiers from having outside contacts, since August, a great number of soldiers announced their statements to quit the CCP through various channels. The CCP's blockade of information has stopped working and its "Steel Guardians" are turning in their guns and joining the historical trend to disintegrate the CCP.

The global quitting the CCP service centers have been booming in every part of the world. A few Russian volunteers from a service center went into remote areas to deliver the Nine Commentaries to the Chinese people in the far east of Russia and helped them to quit the CCP. In less than five days, they had over 160 Chinese people who quit the CCP. These Russian volunteers said they used to suffer under communist rule and that it is their responsibility as global citizens to save the Chinese people and disintegrate the largest evil Communist organization. 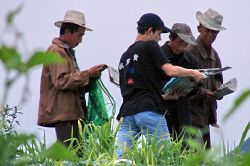 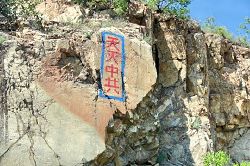 "God is eliminating the CCP" written on a cliff

At tourist spots in North America, Europe, Australia, and Asia, volunteers from the Quit the CCP service center provide services to Chinese tourists. There are a dozen of them in Hong Kong alone. Since last November, a service center located at Taiping Mountain had more than 5000 people who quit the CCP. More than 100 people now quit the CCP each day at that location. A volunteer said that the Chinese people initially didn't understand why they should quit the CCP, but now they can't wait to put their names on the list, some even used their real names. It looks like it has become a trend that Chinese people travel abroad to quit the CCP. 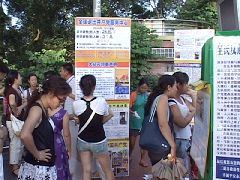 As the CCP disintegrates, the world starts to see through the CCP's evil nature and has fewer illusions about the bubble economy in China. More and more international political figures support those who quit the CCP.

In July 2007, during the dedication at the Memorial for Victims of Communism, President Bush said, "Communism, an ideology that took the lives of an estimated 100 million innocent men, women and children...We dedicate this memorial because we have an obligation to future generations to record the crimes of the 20th century and ensure they're never repeated....It's important that we recall these lessons because the evil and hatred that inspired the death of tens of millions of people in the 20th century is still at work in the world." The speech shows the US has taken its stand against the deteriorating CCP.

On July 18, 2007, the forum "Revealing A True China" was held in the US Congress Building in Washington DC. Many US Congress people, government officials, scholars, and media workers from other countries attended the forum. They had discussions about the phenomenon of "quitting the CCP" and China's current situation and future direction.

Congresswoman Sheila Jackson Lee praised those who quit the CCP. She called upon the Chinese people to quit the CCP in the name of those who died during the persecution and those who are still tortured in prisons. People need to stop the ongoing crimes committed by the CCP for the future generation and for China.

Congressman Dana Rohrabacher paid his highest respect to the Chinese people who refuse to bend to the CCP and bravely face the persecution and killings, including the live organ removal. He thought the forum connected the Americans and Chinese and let the Americans know the true China. The Americans will join the Chinese who love democracy and freedom and form a greater coalition. 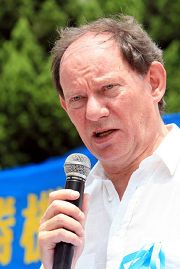 On July 20, 2007, thousands of people from around the world came to the Washington Monument in Washington, DC to attend a parade supporting 24 million withdrawals from the CCP. Edward McMillan-Scott, Vice President of the European Parliament, sent a support letter to the rally. In the letter, McMillan-Scott stated, "Having committed such horrible crimes and embodying an evil that can only be considered unpardonable, the Chinese Communist Party is destined to collapse. The West should support the defense of Chinese people's rights and freedoms and turn its back on the economic illusion being peddled by the CCP. I support the 24 million brave Chinese who have quit the CCP and its affiliates and encourage more to do the same. The West welcomes a new China that is without communism. This is a China that the Chinese people both long for and deserve."

Timothy Cooper, Executive Director of Worldrights, spoke at the rally. Cooper pointed out that so many people quitting the CCP proves that the Communist regime is becoming less welcome and its legitimacy is being questioned. Cooper said that quitting the CCP movement plays an immeasurable role in the path to democracy for China, and that his organization will continue to support it. 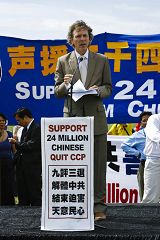 Timothy Cooper, Executive Director of Worldrights, spoke at the rally

US Congressman Proposes Boycott of the 2008 Olympics,

On August 2, 2007, the CIPFG in North America held a press conference on the Human Rights Torch Relay in the US Congress. Congressman Dana Rohrabacher proposed that the US boycott the Beijing 2008 Olympics. Congressman Rohrabacher said unless Beijing makes a fundamental change or the CCP steps down, the US should not attend the Olympics in Beijing. Many Members of Congress have co-signed Rohrabacher's proposal.

In the evening on August 9, 2007, a year before the 2008 Olympics in Beijing take place, at the Syntagma Square in front of the Hellenic Parliament in Athens, people from all walks of life gathered and lit the Human Rights Torch hoping to end the CCP's persecution of Falun Gong. The Torch will travel around the world to over 100 cities. 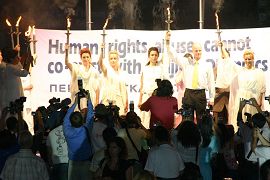 The Human Rights Torch Relay was initiated by the Coalition to Investigate the Persecution of Falun Gong (CIPFG), a group composed of over 300 politicians, medical doctors, reporters and lawyers from around the world. The Coalition proposed to the CCP to "release all imprisoned Falun Gong practitioners, stop persecuting human rights lawyers and just people who support Falun Gong, permit independent investigators to enter China to investigate live organ removal from Falun Gong practitioners." However, the CCP didn't respond to the CIPFG's call and intensifies the persecution of Falun Gong, religious groups, and human rights activists. Through the Human Rights Torch Relay, the CIPFG hopes to gather just voices around the world to boycott the "bloody Olympics 2008 in Beijing" and to stop the CCP's brutality against humanity.