(Clearwisdom.net) On September 10, 2007, Edward McMillan-Scott, Vice-President of the European Parliament, spoke at a forum entitled, "Current and Future Democracy and the Human Rights Situation in Asia" held at Chulalongkorn University in Bangkok, Thailand. Mr. McMillan-Scott pointed out that it is a very serious crime to target Falun Gong practitioners and remove their organs when they are still alive. 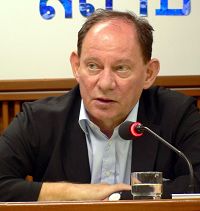 Edward McMillan-Scott, Vice President of the European Parliament, said at the forum organ removal from living Falun Gong practitioners is a serious crime against humanity 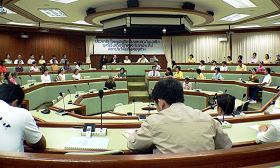 "Current and Future Democracy and the Human Rights Situation in Asia" forum, held at Chulalongkorn University in Bangkok, Thailand

In his speech, he said he traveled in Hong Kong, Taiwan and Thailand to observe democracy in Asia. When he was in Beijing in May 2006, someone told him about a terrible medical phenomenon - people from a spiritual group were being targeted for live organ removal. He learned that this spiritual group was called Falun Gong.

Mr. McMillan-Scott said that he witnessed the persecution. He met with two practitioners, Niu Jinping and Cao Dong, secretly. Mr. Niu had been imprisoned because he practiced Falun Gong. Mr. McMillan-Scott had met Mr. Niu's wife four months earlier. In order to force Mr. Niu's wife to give up Falun Gong, the authorities brutally beat her, injuring her from head to toe. Mr. Cao was in prison and tortured for four years for practicing Falun Gong. According to Cao Dong, a friend of his disappeared one day and the next time he saw him, he was dead and the friend observed a big hole in his body. Apparently, his organs had been removed. David Kilgour and David Matas from Canada, invited by the Coalition to Investigate the Persecution of Falun Gong (CIPFG), conducted an independent investigation on the live organ removal of Falun Gong practitioners and listed a great deal of evidence.

Mr. McMillan-Scott said that it takes 30 to 40 weeks for a person outside of China to get a liver transplant. However, in China, it takes two weeks. Over 40,000 organs with no clear donor sources were transplanted in military hospitals in China. He considers this a very serious accusation against the Beijing authorities. Mr. McMillan-Scott has met with many practitioners and considers them very good people. He thinks that since the practitioners do not smoke or consume alcohol, their organs must be especially healthy. Since the CCP started persecuting Falun Gong in 1999, there have been over 3,000 confirmed deaths of Falun Gong practitioners from various detention facilities.

Media attending the forum included the 9th TV Station in Thailand, the Bangkok Post, and the Japanese National. During the forum, Mr. McMillan-Scott met with Falun Gong practitioners who had fled China and listened to their personal experiences of brutal torture. He recorded the conversations as testimony.