On August 11, 2007, the "Grand March Supporting Twenty-five Million Chinese People Quitting the Chinese Communist Party (CCP) and Protesting the CCP's Persecution" was held in Kaohsiung. More than one thousand people gathered in Kaohsiung to spread the message of quitting the CCP to every corner of the world, and to support Chinese people in denouncing the CCP tyranny.

Professor Ai Chang-jui, a representative from the Global Service Center for Quitting the CCP, introduced the reason and meaning of the great tide of quitting the CCP. Political leaders and figures from all circles gave supportive speeches during the event. There was a reenactment to expose the CCP's atrocities, a performance by the New Tang Flag and Drum Team, and a performance by the Divine Land Marching Band. Over one thousand people marched in the rain and exposed the CCP's crimes of persecution. 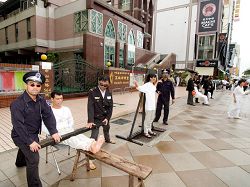 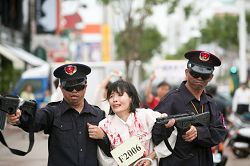 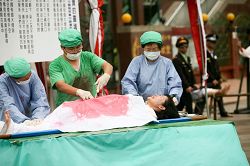 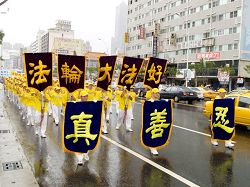 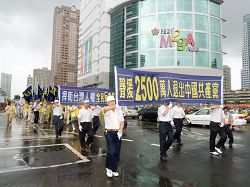 25 Million people have quit the CCP 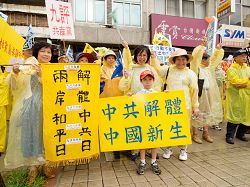 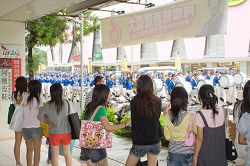 The march included processions with banners about Falun Dafa, protesting the persecution, the Nine Commentaries on the Communist Party, the CCP's disintegration and quitting the CCP. There were also reenactments and an anti-torture exhibition. Director Chang Chi-ming of the Democratic Progressive Party Kaohsiung Branch, along with Legislative Committee members Kuan Pi-ling, Luo Chih-ming, Lin Tai-hua, Cheng Cheng-yu, chairman of the Southern Taiwan Society, and Tsai Ping-huang, representative of the Taiwan Medical Alliance, participated in the march. 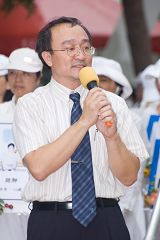 Professor Ai Chang-jui, a representative of the Global Service Center for Quitting the CCP 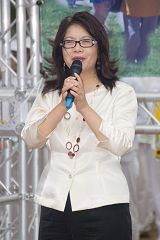 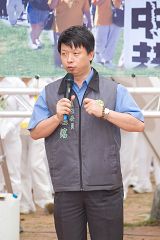 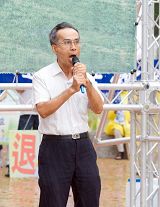 Prof. Ai called on media in Taiwan and across the world to spread the Nine Commentaries and the news about quitting the CCP, since there is an information blockade in China.

Legislative Committee Member Kuan Pi-ling said she was moved that Falun Gong practitioners stood up to protest the persecution, even though it looked like rain was imminent. Everyone in the world should strongly condemn the CCP's trampling of human rights and life. She made three requests: 1. Rescue Falun Dafa practitioners from the CCP's persecution; 2. Encourage and awaken CCP members to quit the CCP as soon as possible; and 3. Unite with all people who care about human rights and about investigating the CCP's persecution in more detail.

Mayor Hsu of Fengshan, Kaohsiung County said that the CCP's persecution of Falun Gong, which includes the live organ harvesting, shocks people and must be immediately condemned and stopped. He hopes that the Olympic Committee exerts pressure on the CCP to improve human rights in China. He called on everyone to demand human rights, not totalitarian authority, to support the human rights torch relay, and to boycott the 2008 Olympic Games in Beijing.

Legislative Committee Member Lin Tai-hua said she was moved and shocked that the Falun Gong practitioners from all over Taiwan gathered to help practitioners in China, even though they faced typhoon-like weather. The CCP ignores human rights and human dignity and should be condemned most strongly. She believes that the CCP's live organ harvesting is very cruel, and encouraged the people of Taiwan to support those who have quit the CCP and always stand by them.

Tsai Ping-huang, a representative from the Taiwan Medical Alliance, said that the CCP is like a tumor on the Earth. For a cancer patient, we need to give the right drugs. It is the same for CCP. He believes we need to boycott the CCP's hosting of the 2008 Olympic Games externally, and support and encourage all Chinese people to quit CCP, and then the CCP will disintegrate internally. This will cause all tumor cells to die from the inside.

After watching the anti-torture exhibition, Miss Li, a second-year university student, said that she could not imagine how the CCP could persecute Falun Gong practitioners so brutally. She felt it was inconceivable that the CCP persecutes these good people who follow Truthfulness-Compassion-Tolerance.

Mr. Ceng, who is in his twenties, said that this was the first time he had seen such a large march. He was very sympathetic when he saw the procession protesting the persecution.

An older lady in her seventies with an umbrella in hand saw the anti-torture exhibition and said, "The CCP is so cruel. Is it killing people to remove practitioners' kidneys for lucrative profit? CCP doctors will receive retribution." She said it was the cruelest thing she had ever heard of in her life. She wished for the persecution to be stopped as soon as possible.

Ms. Huang said she came to watch the march after hearing about it from a friend. She said, "Seeing so many flags and banners with anti-persecution messages, I was really moved, especially when I saw that every person in the procession was steadfast in the rain. When I heard the drums sound, my tears ran continuously."

Taxi driver Mr. Feng said he had heard that the CCP is very bad, as he knew of many business people who went to mainland China to invest and were deceived. Quitting the CCP indicates that the CCP's collapse is imminent. He thought the march was meaningful and would help more Taiwanese people learn about the CCP's evil nature.

The march participants called on people who have illusions about the CCP to recognize its evil nature and denounce it. Only without the CCP will there be a new China.

“Practitioner Ms. Cui Xinxiang from Hebei Province Died on July 11, 2007 as a Result of Persecution”

“Bayreuth, Germany: "An Olympic Games Without the Communist Party Should Be Held" (Photo)”