Falun Dafa practitioner Ms. Deng Yulian lived in Xiangxiang County, Hunan Province. After being released from Baimalong Forced Labor Camp, where she was brutally tortured, she was in severe physical condition. Ms. Deng died on March 12, 2007 at age 42. 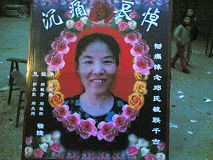 Ms. Deng Yulian was born on October 7, 1964. She was an employee of the Xiangxiang County Stone Material Factory (under the Changsha City Shun'an Railroad Material Limited Company, Changsha Multiple Corp.). She started practicing Falun Dafa in July 1997, and everyone thought she was a good person because she cultivated according to Truthfulness, Benevolence, and Forbearance.

On November 30, 2004, Ms. Deng was arrested by police officers from the Shaoshanchong Police Station (chief: Sun, male, given name unknown) when passing out truth-clarifying materials. Her family was fined 5,000 yuan, and she was detained for 20 days in the Xilipu Detention Center in Xiangtan City. She was then taken to the Baimalong Women's Forced Labor Camp in Zhuzhou City for an 18-month term.

Inside the camp, Ms. Deng endured all sorts of inhumane torture, and she was forced to watch a video and read books that slandered Falun Dafa and Master. She was not allowed to talk or use the toilet, and she was forced to sit on a tiny stool for more than 20 hours per day, causing the flesh of her buttock's to be bruised.

On July 9, 2005, Ms. Deng declared the Three Statements she had written under pressure and torture null and void, and she was tortured again for this solemn declaration. Guards forced her to stand facing the wall for more than ten hours in the heat of July and forced her to squat in the steaming boiler room, on her hands on the knees, forbidding her to step out of an area of less than one square foot. Due to being in that position for a long time, her anus prolapsed. Guards encouraged prisoners to beat her brutally for several days in a row or force her to stand beside the power exchange room, where there were many mosquitoes.

The tortures used in Baimalong Forced Labor Camp are cruel. In order to force practitioners to accept the brainwashing tactics, the camp administration ignores basic human dignity and rights. They put straight jackets (1) on practitioners, inject them with nerve damaging drugs, fasten them to the window frames, force-feed them, force them to balance on the legs of a small upside-down stool, etc. Under extreme mental and physical torture and pressure, some practitioners suffer nervous breakdowns.

In April 2006, twenty days before Ms. Deng Yulian's term ended, she started coughing, her toes felt numb and cold, she had difficulty walking, her eyesight was blurry, and she lost her sense of taste. Ms. Deng was very healthy before entering the camp because she practices Falun Dafa. She could only eat porridge upon returning home. She became weaker and weaker, her muscles atrophied, and she was as thin as a skeleton.

By February 2007, Ms. Deng Yulian was bedridden, could not eat at all, and was deformed beyond recognition. She died on March 12, 2007.

(1) The straight jackets are made of fine canvas, and are put on the victim from the front and tightened from behind the back. The sleeves are about 10 inches longer than the victim's arms, with straps on them. The perpetrators force determined Dafa practitioners into the straight jackets, then pull their arms to their backs, and cross and tie their arms behind their backs. Then, they pull their arms up over their shoulders to their chest, tie up the practitioners' legs and hang them up in the air from windows. At the same time, they gag the practitioner's mouths with a cloth, put earphones in their ears, and continuously play messages that slander Dafa. According to an eyewitness account, people who suffer this torture quickly sustain broken arms, tendons, shoulders, wrists, and elbows. Those who endure this torture for a long time have had completely broken spines, and they die in agonizing pain. See a case of this torture at http://www.clearwisdom.net/emh/articles/2003/11/1/41857.html

“Should Everything In Life Be Smooth After Cultivation?”