(Clearwisdom.net) On March 31, 2007, the weather was still cloudy and rainy in Madrid after raining for several days. Under the gloomy sky, the busy streets seemed bleak. Then at 4:00 p.m., an eye-catching banner in Chinese and Spanish reading, “Global support for the 20 million people withdrawing from the Chinese Communist Party (CCP)” was displayed at Puerta del Sol, a plaza in central Madrid. In the meantime, a loudspeaker was broadcasting the news that “the specters of the CCP have been eliminated...” That was the scene at the rally organized by volunteer workers of the Spanish Service Center for Quitting the CCP to support the 20 million Chinese people withdrawing from the CCP. 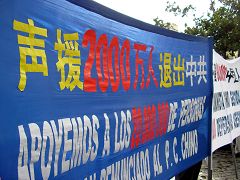 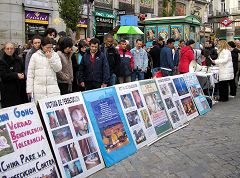 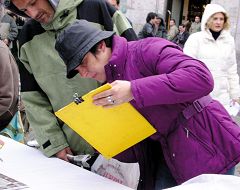 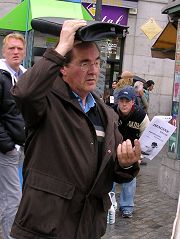 A passerby reads the flyer regardless of the rain 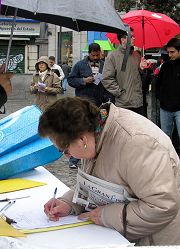 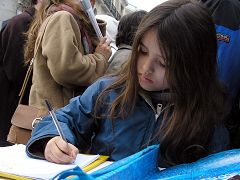 A little girl signs the petition 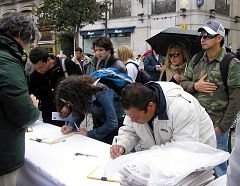 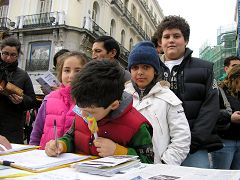 With these activities, the bleak square seemed to come back to life. The hustling people started to slow down their steps and came in grouds to view the display boards exposing the Chinese Communist regime’s atrocities. From time to time, we could hear people condemning the atrocities and expressing their support for the campaign against the persecution.

Despite the drizzle, the gloomy weather didn’t affect people’s enthusiasm for participating in the activities opposing the persecution and supporting the 20 million Chinese people withdrawing from the CCP and its affiliated organizations.

At the square, more and more people came to view the display boards. They asked for flyers and inquired as to how they could help the innocent people being persecuted in China. Upon hearing that signing the petition could help stop the persecution, they came forward to sign their names. 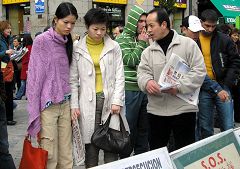 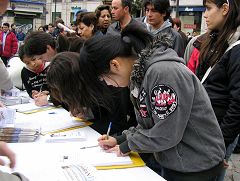 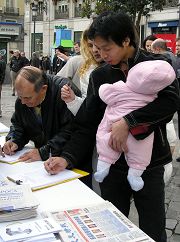 A Chinese person signs the petition while holding a baby 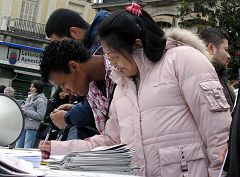 A Chinese woman signs the petition 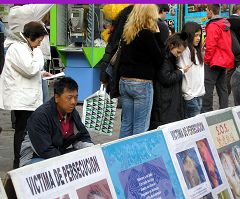 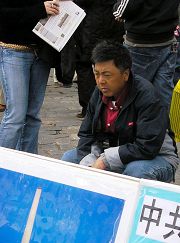 With practitioners’ righteous thoughts, the sky started to clear up after the mild spring sun’s rays dispelled the heavy clouds that had lingered above Madrid for several days. After signing the petition, a mother told her son and other four children about what is going on in China. These children also signed the petition.

Chinese people were spotted among those standing in front of the display boards from time to time. They attentively viewed the display boards with the photos exposing the Communist regime’s cruel atrocities. After realizing the facts about the persecution, some young Chinese angrily said, “It is the CCP’s corruption, bullying civilians and persecuting innocent people that makes Chinese people feel shameful in foreign countries. The Chinese Communist regime’s autocracy has destroyed the 5000-thousand year traditional Chinese culture and its moral standards.”

Pointing to a photo showing a Chinese policeman administering cruel torture against a Falun Gong practitioner, a man said, “The CCP is just like the Nazis of the past, or even crueler than the Nazis.”

Before the activities came to a close, a young woman from Peru talked to a volunteer worker and asked whether the activities would be held next weekend. She said, “I wish you great success.” She also told the volunteer worker that she is a dedicated Christian and she would pray for blessings on the Chinese people who are under persecution. Before leaving, she further said, “Keep persevering! Success is not far away.”