NTDTV's Holiday Wonders performed by the Divine Performing Arts will be shown on December 18-26, 2007, at the Beacon Theater, 2124 Broadway, New York City. New York State Assemblywoman Audrey Pheffer issued a citation commemorating NTDTV and the Holiday Wonders Show. Below is the text of the citation.

, Organizations and individuals who give of their time and energies and serve the best interest of their communities are an asset beyond remuneration and cannot be sufficiently extolled; and

, It is the tradition of this State and this Nation to pay tribute to those institutions and individuals who have contributed to the ethical, social, and spiritual values of their communities; and

, This Assemblymember is honored to commend New Tang Dynasty Television on their Holiday Wonders Show; and

, NTDTV Holiday Wonders will bring together the Chinese communities as well as all people interested in Chinese culture for an incredible show inspired by the spirit of the holiday season; and

, NTDTV began broadcasting via satellite in North America in February 2002 and extended its programming to cover Asia, Europe, and Australia in 2003. Headquartered in New York City, NTDTV currently has reporters and correspondents in over fifty cities worldwide; and

, The Holiday Wonders presents a gift of genuine Chinese culture with a pageant of hundreds of dancers and musicians in a collection of exquisite performances; and

, On this occasion this Assemblymember is proud to commend NTDTV for brining this wonderful performance together and celebrating the holiday season by blending traditional Chinese performances with western holiday classics; and

, It is the custom of this Assembled Body to take note of enduring, dedicated organizations and to bring such institutions to the attention of the people of this Empire State; now, therefore, be it

, That this Legislator pause to commemorate NTDTV's Holiday Wonders Show, running from December 18th to the 20th at the Beacon Theater in Manhattan; and be it further

, That a copy of this Citation, suitably engrossed, be transmitted to New Tang Dynasty Television. 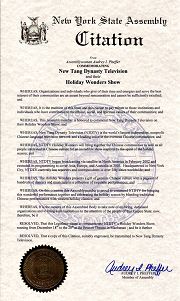