(Clearwisdom.net) Three years ago my wife, Ms. Zhang Lihong, was in Lufeng City, Guangdong Province, taking care of our two young children, her blind mother, and her 80-year-old father. Owing to her belief in Falun Gong and for exposing the evil deeds of the Chinese Communist Party (CCP), Shanwei National Security Team agents arrested her twice, on May 19, 2004, and October 26, 2004. Following the first arrest, my wife started a hunger strike to protest the unlawful detention. Due to local and overseas rescue efforts, the police released her after three days. Shanwei National Security Team agents did not follow any legal procedures during the second arrest and sent my wife immediately to the Sanshui Women's Forced Labor Camp for a three-year sentence, in complete violation of the Chinese constitution. 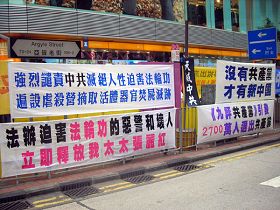 While my wife was detained and persecuted for three years, I exposed the CCP's crimes in Hong Kong with banners such as these

During these past three years, our two young children repeatedly asked me, "When will Mom come back?" Also, during these three years, her mother appeared to be severely mentally disabled, owing to the great shock from knowing her daughter had been arrested and sent to a labor camp.

After my wife's three-year term had ended, I called officials at the Sanshui Women's Forced Labor Camp on September 28, 2007, and asked them about her release. The camp officials told me, "Zhang Lihong's term is finished. She is not here anymore." I was very surprised. If they had released her, why hasn't she returned home?

My persistent questions finally led to them telling me that they had reported her release to officials in Shaoguan City, where my wife's household is registered. As it turned out, agents from the Shaoguan City 610 Office, in cooperation with national security police, took my wife out of the labor camp and detained her again, this time in the Guangdong Province Legal System School, which is actually a brainwashing center.