(Clearwisdom.net) In early October 2007, a "Special Olympics" (Olympics specially designed for the handicapped) was held in Shanghai. It was a grand event; the CCP propaganda machine called it "a world of universal harmony under heaven."

Is it true that the CCP really cares about the handicapped? Not likely. The Special Olympics gave it a great opportunity to trick the world into believing that the CCP cares, but if one looks at what goes on behind the scenes in China, the bitter truth tells a much different story. On the one hand, the CCP promotes itself, welcoming handicapped athletes from abroad, while on the other hand, at home, the CCP ruthlessly tortures countless healthy citizens, leaving them handicapped or even dead.

The CCP espouses the spirit of the Olympics in the name of "equality and tolerance, and respect for humanity" and traditional values of "charity, helping the poor, respecting the elderly, caring for the young, and supporting the handicapped." Yet at the same time, it continues to perpetrate heinous crimes inside China's labor camps, prisons, and "transformation" centers.

In order to force Falun Gong practitioners to give up their beliefs, CCP authorities utilize every imaginable kind of torture. Thousands have been killed. Huge numbers have been left handicapped - crippled, blind, deaf, paralyzed, branded, burned, and as amputees. Even worse, these tragedies continue to happen today.

The confirmed number of Falun Gong practitioners persecuted and maimed by torture and drugs reaches into the tens of thousands. This is only the tip of the iceberg. Beatings, handcuffing, electric shock torture, brutal forced-feeding, hanging upside down, injections with drugs, burning, and sexual abuse are just a few of the methods the CCP uses to torture people.

Presented below is a small sampling of such cases.

On January 8, 2002, Mr. Wang Xinchun, a resident of Jinshantun District, Yichun City, Heilongjiang Province, rode a bike to a forest area to hand out Falun Gong truth-clarification leaflets. He was illegally arrested by Wang Wei, the captain of the local police station. Under the instigation of Wang Wei and Cui Yu, the Director of the Public Security Bureau, the police pressed Mr. Wang's frostbitten legs into a pot of hot water. Mr. Wang's feet deteriorated to the point that they disintegrated, and he became permanently disabled.

Wang Xinchun was thus maimed as the result of the persecution

On the night of January 12, 2001, a Jinan City Falun Dafa practitioner, Ms.Xu Fayue (a graduate of the Shandong Mine Hospital in the class of 1997), was taken from her home by the Political and Security Unit of the Public Security Bureau of Shandong Province. During her detention in the Liulishan Police Station, Ms. Xu was handcuffed into a bed with her two legs wide open. Her body was covered only by a thin cloth, and her hands and feet were exposed to the outside. She had no choice but to urinate in the bed. Her underwear, pants, and socks were all soaked by her urine and no one cared for her. In temperatures even lower than 10 degrees below zero, she was left barefoot and ended up severely frostbitten. Her toes had to be removed, leaving her permanently disabled.

Xu Fayue -- mistreatment left her frostbitten, leading to the amputation of her toes

In October of 1999, Ms. Fu Li, a Falun Dafa disciple from Shuangcheng City, Heilongjiang Province, went to Beijing to appeal for Falun Dafa. She was illegally arrested by the police in Tiananmen Square and sent back to Shuangcheng City by the 610 Office. During her detention in Wanjia Labor Camp, she was tied up by her thumbs with a rope and was hung like that by the police, with her thumbs bearing the whole weight of her body. Her hands became crippled after this kind of hanging, and she could no longer take care of herself. 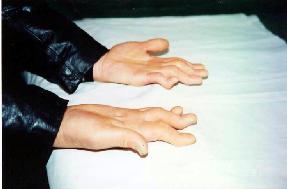 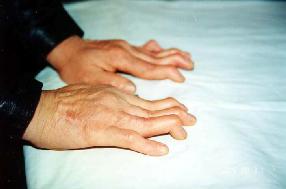 This photo shows the picture provided by Ms. Fu Li, the victim.

On December 2, 2001, Ms. Li Huiqi, a worker from Shijiazhuang City, Hebei Province who worked in a paint company, was kidnapped by the Weiming Street Police Station (also known as "the Xinghua Street Police Station") while she was clarifying the facts to people about the persecution of Falun Gong. During her illegal detention, her health deteriorated and her condition became critical. Her health was ruined.

On April 9, 2002, Ms. Li was tortured to the verge of death and sent to the People's Hospital of Hebei Province. It was due to her critical condition that her family was allowed to see her. She looked as though she was just a bag of bones. She was later diagnosed with Guillain-Barre Syndrome (GBS) and transferred to the Third Hospital of Hebei Province for treatment. The persecution had caused her to suffer from general paralysis, periodical coma, urinary tract infection (4+), and a serious lung infection. Her trachea was cut and she depended on a ventilator to breathe. Her body also suffered from periodic spastic twitching.

On June 13, 2002, Wang Haiyan was clarifying the facts of the persecution of Falun Gong to people in a department store in the Dongshan District, Guangzhou City. She was followed, reported, and kidnapped by malicious people to the Dongshan District Forest Road Police Station. She was tortured and her eye-ball and optic nerves were injured. There were many bruises on her brain and her left eardrum was injured and lost its hearing. Her upper and lower body were beaten to until they became a purplish green color and were and covered by bloodstains. Her right eye was completely shrunken and sunk into her skull. She had great difficulty walking, and she couldn't take care of herself.

In July of 2003, Gao Rongrong, a Falun Gong practitioner who worked in the Department of Treasury in the Luxun Fine Arts Academy of Shenyang City, Liaoning Province, was abducted by the public security agents and sent to the Longshan Labor Camp. She was tortured there and her face was severely disfigured after nearly 7 hours of electric shocks. On May 7, 2004, Ms. Gao was called to the offices of Tang Yubo, the deputy director of the second battalion, and Jiang Zhaohua, the leader. They handcuffed her to a radiator and tortured her. They shocked her for six hours. She was severely disfigured, swollen, and full of blisters. Her skin was charred, and her hair was stuck together with blood. Her face and mouth became so deformed that even the other inmates couldn't recognize her. She died from the persecution on June 16, 2005.

Photo 1: Gao Rongrong, a Falun Gong practitioner who worked in the Treasury Department of Luxun Fine Arts Academy of Shenyang

Photo 2: Gao Rongrong was brutally tortured on May 7, 2004. This photo was taken 10 days after the torture.

On April 13, 2000, Mr. Qu Hui, a Falun Gong practitioner who lived at 41 Yihuo Street, Zhongshan Distirct, Dalian City, was detained in the Labor Camp of Dalian City because of his belief in Falun Gong. He was brainwashed, tortured and forced to do hard labor. His genitals were subjected to electric shock, leading to ulceration. He suffered from cervical fractures and severe paraplegia. He was released from the labor camp only when he was near death. For the past four years, Mr. Qu has been lying in bed, and he can't roll over or stand up. His wife has to manually extract his stool.

At the end of 2001, Mr. Zou Yanjie, a Falun Gong practitioner from Nongan County, Jilin Province, was kidnapped to a police station. A perfectly healthy young man, he was persecuted and lost his legs and became maimed. Because he lost the ability to work, his wife divorced him, and he depended on his parents to take care of him. Now, he lives with his parents. In order to avoid persecution, they are forced to drift around destitute and homeless.

Mr. Zou Yanjie's legs were amputated because of the persecution.

Zhou Qing, a Falun Dafa disciple from Hubei Province, was an outstanding high school Physics teacher in the First High School of Jingshan County, Hubei Province. Zhou was illegally detained many times. In July of 2004, Zhou was kidnapped by the Xiaogan's National Security Bureau and severely persecuted in the Xiaogan Detention Center, causing paralysis of his legs, muscular atrophy and the inability to speak. Even in such a circumstance, Zhou was not spared, and was taken to the provincial brainwashing center and injected with unknown drugs. It was only when Zhou was in critical condition that his family was contacted and Zhou was released on bail. On June 22, 2005, while not fully recovered, Zhou was again kidnapped by the Xiaogan's National Security Bureau. In July of 2005, Zhou was illegally sentenced to four years in jail by the CCP's district court. Zhou is still being illegally detained there.

Ms. Cui Huanying, a Falun Dafa disciple from Baoding City, Hebei Province, became blind in her left eye as the result of the persecution by the Wangdouxuan's Brainwashing Center.

Mr. Yang Guang, a Falun Dafa disciple from Changchun, was persecuted and became maimed as a result of torture to extort a confession.

Ms. Zhu Fuju, a Falun Gong practitioner from Heilongjiang Privince, was persecuted and became maimed by being hung for a long period of time in Heilongjiang Women's Prison.

During the process of extorting a confession by torture by the police from Jinyun County, Zhejiang Province, Dafa disciple Mr. Fan Zhongzhuang was persecuted to the point of becoming maimed.

Cases of the Falun Gong practitioners who were persecuted and became disabled have been extremely numerous, and what is shown here is just the tip of the iceberg. The real extent of the persecution is beyond ordinary people's imagination.

The rogue CCP is trying to cover up the persecution and is using lies to deceive the world and to prevent people from knowing the truth. Many Falun Gong practitioners who became maimed because of the torture were illegally arrested while they were clarifying the facts of the persecution to people.