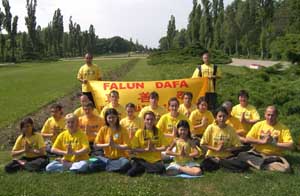 SATURDAY AT 8: Borissovata Gradina in Sofia is where Falun Gong meet to meditate and do exercises, following the principles of Truthfulness, Compassion and Tolerance.

"Falun Gong makes us better people, more tolerant, more truthful, and completely healthy. It is a way of living," they say, having just finished meditating for an hour. It is nine o'clock in the morning and some of them have come to do exercises that the practice espouses. They also teach them to anyone who wishes to learn, or they use the opportunity to tell people about the persecution of Falun Gong members in China by the Communist regime, which has been going on for more than eight years.

Kremena has been practicing for several years. She came about the system after setting out on a search for the meaning of life, and found it through Falun Dafa. Zahari, or Zaro, as his friends call him, introduced her to it.

He was practicing martial arts, but wanted to find something more interesting, and went to the Internet. What he found was something that explained the essence of Eastern qigong practices. Qigong is a general term for all the Eastern practices that deal with cultivation of "qi", or the vital energy of the human body. Zahari came upon the Bulgarian version of the Falun Dafa website, which is maintained by a Bulgarian follower who lives with his family in Australia. The man in Australia had also translated some of Falun Dafa's books and audio-video materials. Zahari passed on his enthusiasm about the practice not only to Kremena, but also to a number of his friends.

His wife Tsveta came along out of curiosity. Even though she was interested in questions about religions and various philosophical teachings, she was afraid to explore deeper because of the many phony practices that exist. With the passing of time, however, Tsveta, an architect, saw how Falun Gong changed Zahari. So she began to read the books and later started practicing.

Over the years Bulgarian followers have been making steady efforts to reveal the truth about the persecution of the Falun Gong in China. Although the number of practitioners in Bulgaria is far smaller than in neighboring countries like Turkey, Greece, Romania and Ukraine, practitioners are confident that they are up to date with Falun Dafa activities around the world, where more than 100 million people practice.

n 1999, a great danger presented itself to the Chinese followers of this ancient practice. At that point in time, they numbered about 10 percent of China's population, or almost twice the amount of members of the Chinese Communist Party. Driven by spite and jealousy as well as by party ideology, which completely opposes Falun Gong's main principles of Truthfulness, Compassion, and Tolerance, the former communist leader Jiang Zemin launched a nationwide campaign of persecution that continues to this day. He ordered the specially established 6-10 office to "physically and mentally destroy" the Falun Gong. The inhumane torture to which practitioners have been subjected has caused the death of more than 3000 people.

In 2006, the former secretary of state of Canada David Kilgour, along with international human rights lawyer David Matas, published a report confirming the allegations that Falun Gong practitioners jailed in labor camps and prisons across China without due process of law were forced to be organ donors. The authors of the report called this phenomenon "a new form of evil unseen on this planet before" and visited many countries to raise awareness about evidence of cruelty by Communist China.

Kilgour came to Bulgaria, invited by the Bulgarian Helsinki Committee, in April 2007 and introduced his report at a forum in Grand Hotel Bulgaria. The report, since translated into Bulgarian language, has had thousands of copies circulated and has attracted public attention despite a lack of media publicity.

"We organize many activities, but the Chinese embassy often makes attempts to spread slanderous propaganda against us, distorting the practice, as it does around the world," Ekaterina Popova, a journalist and practitioner, said. She first encountered Falun Dafa in 2002 when the Chinese regime fabricated the self-immolation incident at Tienanmen Square, claiming that the five individuals who set themselves on fire were Falun Gong practitioners.

By doing so, the regime hoped to justify the persecution. However, more and more people learned about this persecution and it became even more difficult for the regime to cover it up. In fact, the topic of human rights is well discussed among politicians and non-governmental organizations. Three years passed before Ekaterina heard again about the practice. That time she received an e-mail talking about a new initiative by the Bulgarian followers. She made an appointment to receive the book Falun Gong (the introductory text of the practice), gathered information and published a full-page article in the newspaper at which she worked at the time.

On the first coming Saturday - the day when practitioners do the exercises together in the park - Ekaterina went to the practice site in Borissovata Gradina. She learned the exercises after reading the book cover to cover and hasn't stopped since. She says she finally found what she had been looking for - the way of life and the way to perfection that gives meaning to her life.

Bulgarian practitioners have sent petitions against the persecution with thousands of signatures of Bulgarian citizens to the United Nations and the Council of Europe, as well as to various Bulgarian politicians - the president, the prime minister, different ministers, MPs and others. The petitions embody the efforts of Bulgarian followers to become part of worldwide efforts to stop this bloody persecution in China.

The most recent Falun Gong activity in Bulgaria was the display of an international exhibit called Truthfulness, Compassion, Tolerance, which was exhibited for more than 20 days at the Cabinet underpass in the centre of Sofia. The oil paintings created by Chinese artists who practice Falun Gong revealed their personal experiences in prisons and labor camps while being illegally detained by the regime. Shown in more than 40 countries, as well as in the European Parliament this exhibit has given hope to many visitors.

Several years ago, the Bulgarian practitioners displayed works of the Chinese artist Zhang Cuiying, whose paintings had also been shown in Brussels. Her paintings were supposed to be shown in a club in the building of Parliament; however, a few days before the official opening, the Chinese embassy in Sofia interfered and the speaker of Parliament canceled the exhibit. Instead, the paintings were shown at the Hungarian Cultural Institute. They also attracted much media attention.

Until the regime in China collapses, followers will strive to help clarify the truth and reveal the essence of Falun Gong by spreading the practice that has brought good health and peace to more than 100 million worldwide.

“The Miraculous Transformation of My Sister's Family”