(Clearwisdom.net) At noon and in the evening on August 21, 2006, two seminars about the CCP's harvesting organs from living Falun Gong practitioners were held at the Thomas Moore Center in Melbourne, home of the National Civil Council. Peter Westmore, the president of the National Civil Council, hosted the seminars. David Kilgour, the former Canadian secretary of State for Asia and the Pacific, Edward McMillan-Scott, the vice-president of the European parliament, Victor Perton, MP of Victoria, Jan Becker, an Olympic Silver Medal winner, and two Falun Gong practitioners--Zhang Dongfan and Dai Zhizhen--were invited to give a talk. 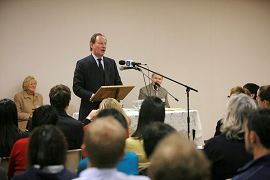 Edward McMillan-Scott is giving a speech.

Victor Perton, MP of Victoria, said that he sent an email to his colleagues in the parliament, inviting them to the public forum in Canberra, at which Mr. McMillan-Scott and David Kilgour would speak. What surprised him was that the Chinese Embassy emailed him, because one of Westmore's colleagues forwarded his email to the Chinese Embassy. So Mr. Perton emailed the Chinese councilor to invite him to the forum. The Chinese councilor replied but didn't say if he would attend or not. Mr. Perton saved a seat for him.

Mr. Perton said that he invited everyone at the seminar to write to every parliament member, every CEO of big Australian companies, and the president of the Australian Olympic Committee about the CCP's harvesting of organs from living Falun Gong practitioners. He said that everybody should invite his or her friends to write such a letter. Mr. Perton said the Australian politicians and businessmen know what is happening in China, but they don't want to talk about it, because they want to do business with the Chinese. He said that if everybody steps forward a little, then the evil power will be eliminated and the evil behavior will be stopped.

Mr. Kilgour said that he would like to compare the CCP's persecution of Falun Gong with the persecution of Christians by the Roman empire. He said that the belief in "Truthfulness-Compassion-Forbearance" is the opposite of the CCP's brutality. Mr. Kilgour listed the evidence of the CCP's harvesting organs from living Falun Gong practitioners. As to how to stop the brutality, he said that people can write or call their congressmen and senators. We can exert pressure on the CCP. He said that everybody knows that the CCP is concerned about the Olympic Games in 2008 in Beijing. If the CCP is still persecuting Falun Gong in 2008, no government should attend the Olympic Games in Beijing.

Mr. McMillan-Scott said that they have verified the evidence given by the Canada Independent Investigation Group. He said that in China, the systemic killing of Falun Gong practitioners to make profits is happening on a large scale, and constitutes the crime of genocide. Mr. McMillan-Scott said that he believes the Australian government will criticize what is happening and support Falun Gong practitioners and other political prisoners. Mr. McMillan-Scott hoped that a union, including the international organizations such as Red Cross and the UN, would be formed to investigate these issues.

Falun Gong practitioner Zhang Dongfan talked about her experience of being persecuted: she had been arrested six times, jailed in detention centers twice, and put in brainwashing centers twice. She was sentenced to labor camps one and a half years twice. In the labor camps, she was forced to do heavy labor 16 hours a day. During the first time in a labor camp, she had a physical examination. The labor camp didn't give her the result of the examination.

Falun Gong practitioner Dai Zhizhen and her daughter came from Sydney to the seminar. She told the attendees how her family was destroyed by the CCP. She called upon everybody to read the investigation report. She said: "I and my daughter, as the representatives of all the women and children who are being persecuted by the CCP, call upon the public to take actions to stop the persecution."

Attendees discussed how to draw public attention to the organ harvesting and how to encourage congressmen and senators to exert pressure on the CCP.

After the seminars, some attendees told reporters that they were shocked by the investigation results and they hoped that the Australian government would take action to stop it.