On April 23, up to fifteen thousand Taiwanese Falun Gong practitioners marched in Taipei to condemn the CCP's persecution of Falun Gong and its atrocities of harvesting organs from living practitioners, and to support ten million Chinese who have quit the evil party and its affiliated organizations. 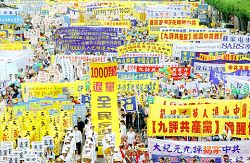 Regarding U.S. Falun Gong practitioner Wenyi Wang's protest during president Bush's welcome ceremony for Hu Jintao at the south lawn of the White House, Taiwan Falun Dafa Association director Chang Ching-hsi said that he doesn't agree with her act, however, he can understand. Chang said that Wang couldn't go back to China last year when her father suddenly passed away.

Taiwan Falun Gong practitioners held a parade to support Ms. Wenyi Wang and the theme of the parade was "Good and Evil will meet retribution and heaven will destruct the Chinese Communist Party." The parade started at 1:30 p.m. and the procession ranged about 4 km. (2.5 miles). In the parade, they reenacted atrocities of organ harvesting and torture.

Prof. Ming Chu-Cheng, chairman of the Rescue Persecuted Falun Gong Practitioners Organization, said that the Nine Commentaries on the Communist Party published by The Epoch Times in November 2004 inspired Chinese to quit the evil party. In less than one and a half years, nearly ten million quit the CCP and its affiliated organizations.

Organizers of the parade pointed out that in a large scale the CCP is now tracking and arresting civilians who have spread the Nine Commentaries and helped others to quit the CCP. The Service Center for Quitting the CCP recently submitted a name list of more than 70 Chinese who have been arrested for spreading the Nine Commentaries. Gao Hui, a lady in Changsha City, was sentenced to seven years in prison and the case has attracted public attention.

“April 25: From the 1999 Peaceful Appeal to Today's Ten Million Withdrawals from the CCP”

“San Francisco: On April 25, CIPFG Demands to Go to Mainland China to Investigate the Persecution Facts against Falun Gong (Photos)”