(Clearwisdom.net) Chinatown in Manchester is a place for Chinese people in northern England to gather. Falun Gong practitioners from Manchester and nearby cities, as well as volunteers from the Epoch Times newspaper, met to expose the Chinese Communist Party's cruel persecution of Falun Gong to passers-by in Chinatown. Recently, many evil crimes have been exposed, where Falun Gong practitioners' organs were removed while they were still alive and their bodies were cremated to remove the evidence. 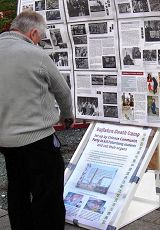 The practitioners along with the volunteers set up a table next to the pavilion at a busy intersection. The documentary film the Nine Commentaries on the Communist Party (an editorial published by the Epoch Times newspaper) was played on a TV. The practitioners displayed pictures and also placed some newspapers next to the entrance of a busy thoroughfare.

A Chinese person passed by and wanted to shake hands with the practitioners: "What you have done is great! I've seen you in other countries and this is the first time seeing you in UK. I support you!!"

Several Christians who often went to Manchester said to the practitioners that they have formed a deeper understanding of the CCP's persecution of the Chinese people.

Many Chinese and westerners were pleased to accept leaflets. Lots of people also came to ask for the "Nine Commentaries of the Communist Party". Many people saw the large banner hung between the pavilion and the archway with the words "Support the nine million people who quit the CCP. Only without the CCP can we have a new China." Some people took pictures of their friends standing next to the banner.

A Chinese lady talked with her husband by mobile phone to discuss where to meet. They talked about several places but had not yet decided when she raised her head; she saw the big banner and said "Let's meet at the site of the banner 'Only without the CCP can we have a new China.' Then she and her two daughters laughed. After receiving the "Nine Commentaries on the Communist Party" and a leaflet, her husband arrived. The practitioners watched this happy family leave smiling.

Sometimes, practitioners came across Chinese people who were badly deceived by the CCP propaganda and would not listen to the truth. However, the practitioners kept righteous thoughts and a heart of compassion. An elderly overseas Chinese person, who was deeply poisoned by the CCP, usually blustered, clamoured and shouted at the site where the practitioners held activities. Practitioners talked with him about the true nature of the CCP. He was speechless after hearing the truth. He clammed up and then said, "If these accounts of the CCP's actions are true, I would go to the Embassy in Manchester and protest at the Embassy." His tremendous change made the practitioners understand that some people look like they are impervious to advice, it is actually we ourselves do not have enough compassion.

Some Chinese people who previously did not want to accept leaflets now also started to accept the information distributed by the practitioners.