(Clearwisdom.net) Practitioners from all over Europe held a rally at the headquarters of the UN Human Rights Committee in Geneva on April 3, 2006. They condemned the crimes of the CCP, who butcher Falun Gong practitioners by removing their organs for resale, and then burn the bodies to eliminate the evidence. Practitioners called on the UN to make an immediate investigation into the atrocities perpetrated by the CCP. Swiss MPs and delegates from international NGOs attended or forwarded letters expressing their concern for persecuted Falun Gong practitioners and condemning the crimes of the CCP. 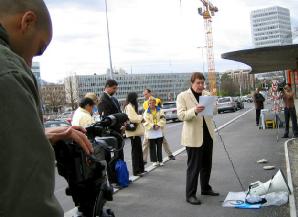 Christian Zangg, an MP from Geneva speaks at the press conference

An MP from Geneva: "The CCP must immediately stop the persecution of Falun Gong practitioners and stop the killing."

At the rally, Christian Zangg, an MP from Geneva pointed out that the CCP has infringed on human rights to such an extent that it has gone even further than the Nazis who committed crimes in concentration camps in World War II. In its concentration camps, the locked-up people were those who had different opinions from all walks of life or just belonged to those who have different politics and faiths. "Four thousand Falun Gong practitioners have been already persecuted to death in the blood-curding concentration camps and their organs have been removed as well, which has drawn our attention, because actions like this are making us bristle with anger and arousing great public indignation."

Christian Zangg called on the CCP to immediately stop the persecution of Falun Gong practitioners. He emphasized, "Today's demonstration sends a signal to the world telling everybody: Geneva, an international city, is calling on leaders of the CCP Government to stop the killing!"

Swiss MP: "We can not keep silent in the face of the terrifying incidents happening right now."

Many Swiss MPs wrote letters to the organizer of the rally expressing their great concern over the concentration camps.

In her letter, Madame Maria Roth Bernasconi MP said, "I condemn any actions infringing on human rights, no matter where they have happened. People's dignity should be respected in all places. No excuses can be made to infringe on basic human rights such as the persecution of Falun Gong practitioners, in any philosophy, faith and policies of democratic countries."

In her letter, Bernasconi also wrote, "I condemn the existence of the concentration camps which remind us of the calamities in the past. People have been taking it for granted that concentration camps are a thing of the past. In fact, it is not so. We can not keep silent when these terrifying incidents are happening right now."

In his letter, Mr. Patrice Mugny, the Minister of Culture in Geneva and an MP, said, "Concentration camps are now being set up and used in the persecution of Falun Gong practitioners, which shows a more sinister regime. Freedom and belief and cultivation belongs to basic human rights, we don't understand the reason why practicing Falun Gong can bring a crisis to the CCP Government and we hope that the CCP leaders can understand this one day.

A researcher from the Ethnography Museum of Geneva: Everybody should play a role as a sentinel in defending human beings.

Madam Erika Deuber-Zieger, a former MP and a researcher from the Ethnography Museum of Geneva pointed out: In 1942 when Mr. Gerhart Riegener (who passed away in Geneva in 2001) disclosed to all governments and all international organizations that the Nazis would decimate the Jews of Europe, wasn't it true that everybody was laughing at him during his appeal? Who believed him? Who took any action?

Deuber-Zieger expressed that today, the appearance of the Chinese concentration camps, particularly the terrifying incidents of removing organs from the detainees and burning their bodies to destroy the evidence has been covered up. Though being far away from each other, we cannot verify personally these persecuted Chinese people, but every one of us should play a role as a sentinel in defending humanity.

“US Congressman Rohrabacher: "It's time for the civilized world to say 'no' to the monsters that are tearing apart people in China" (Photo)”