(Clearwisdom.net) The Central News Agency reported on March 16, 2006 that the Sujiatun Concentration Camp in Shenyang City, Liaoning Province imprisons and persecutes Falun Gong practitioners, removes bodily organs of the practitioners who are still alive and sells them for profit. The revelation grieved and enraged Falun Gong practitioners around the globe. Practitioners from Toronto, Ottawa and Montreal and other places will hold a 72-hour hunger strike starting from noon today on the square in front of the Parliament Hill in Ottawa to protest Chinese Communist regime's outrageous and inhuman atrocities. 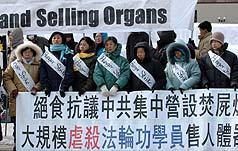 President of the Canadian Falun Dafa Association Li Xun expressed that according to the investigation of the World Organization to Investigate the Persecution of Falun Gong (WOIPFG), there truly exists a large "organ market" in Sujiatun, Shenyang City, Liaoning Province, China. It is a systematic procedural practice, which includes building the death camp, detaining the "suppliers," (living Falun Gong practitioners) matching Falun Gong practitioners' organs with people who need them, surgically removing the organs, eliminating the victims' bodies, and setting up the hospitals that use these stolen organs.

Li Xun said that International human rights organizations have reported an independent system of harvesting death-row inmates' organs, and even cases of the prospect of organ harvesting playing a role in the determination of capital punishment. Without any legal procedures, Falun Gong practitioners are taken to the Sujiatun death camp without anyone's knowledge. They are in complete isolation.

Li Xun said that a large number of Falun Gong practitioners have been secretly abducted to and imprisoned in this death camp. According to a witness, it is "too horrible to watch." Because these are not regular death-row inmates with predetermined execution times, the timing of the organ harvesting is determined by when they are needed by the hospital. The organ-harvesting operation is conducted on living Falun Gong practitioners. Because the process is extremely brutal, a majority of the medical professionals involved in the organ harvesting have suffered severe psychological trauma. Certain individuals have even committed suicide because of the extreme psychological pressure.

Li Xun emphasized that although the Chinese Communist authorities and staff members involved keep it a top secret, a lot of people have learned some information about the death camp. Many high-level Chinese Communist government officials in Liaoning Province and Shenyang City, especially those at management levels in the health bureaus, know about and have collaborated in this operation. The establishment and operation of the death camp has been masterminded at top levels of the Chinese Communist Party. The investigation is still ongoing.